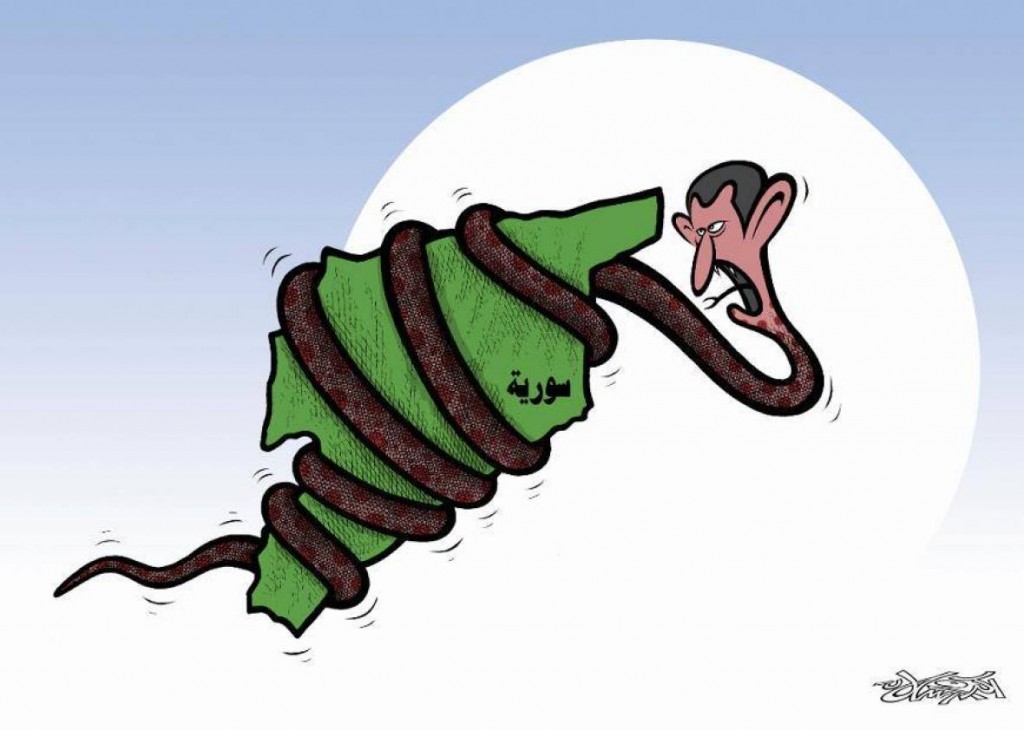 When Syria’s civil war began in 2011 as an outgrowth of the Arab Spring uprisings that swept the region, many citizens were initially optimistic about the outcome, seeing a chance to overthrow the brutal Assad regime. Instead, the instability in Syria and neighboring Iraq gave rise to ISIS, and regular Syrians now found themselves trapped between two forms of repression and terror. As the early optimism quickly dissolved, a few bold cartoonists continued to document the situation in the country. At least one of them, Akram Raslan, apparently paid with his life after being tortured in prison.

In a recent joint dispatch for Slate and the international culture and politics journal Roads & Kingdoms, journalist Asher Kohn reported on the state of cartooning in Syria today. Many cartoonists who were on the Assad regime’s radar have already fled the country, and most of those who remain do not sign their work. Raslan was one of the few who would attach his name to his criticisms of Assad, said Waseem Marzouki, a Syrian artist and animator who now lives in Qatar. “That guy is fucking brave,” Marzouki told Kohn. “I hope my English is good enough to tell you how brave he is.”

Another cartoonist who continued to sign his work was Ali Ferzat, part of the older generation who had worked in state-owned media before he turned resolutely against Assad. In 2011, after he drew a cartoon that encouraged the dictator to hitch a ride out of town with Muammar Gaddafi, Ferzat was brutally beaten by members of a militia that supported Assad. The assailants broke both of his hands, just to make sure he received the message that he should quit drawing. Instead he fled to Kuwait, where he continues drawing to this day.

Based on Ferzat’s example, no one could really blame other Syrian cartoonists for wishing to remain anonymous. But Marzouki now feels guilty that their anonymity only increased the danger for Raslan. “We should have mentioned our names, we should have been half as brave as he was,” he said. “But we decided to be scared and afraid. Something might have happened to us and to our families.”

In tribute to Raslan’s courage, the independent news service Souriatna last month launched a new satire magazine named after him. In the first issue, available for free online, every cartoon is signed.