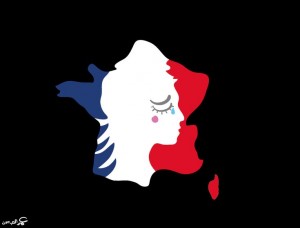 Since Friday night’s coordinated terrorist attacks in Paris that killed 129 people and injured 352, the international community has joined with France and its capital in demonstrations of mourning and solidarity. With much of the memorialization taking place on social media, cartoons are spreading like wildfire just as they did after the Charlie Hebdo attack in January. Below are just a few of the most evocative images from cartoonists around the world.

Many of the tributes naturally involve the most internationally recognizable symbol of Paris, the Eiffel Tower. Perhaps the single most-shared image of all is the simple but striking “Peace for Paris” by French graphic designer Jean Jullien, who combined the Tower with a peace sign on Friday evening and posted it on Instagram, whence it quickly spread across the world.

Egyptian cartoonist Doaa Eladl, who has firsthand experience with extremist threats in her own country, drew a terrorist taking a selfie with the Tower: 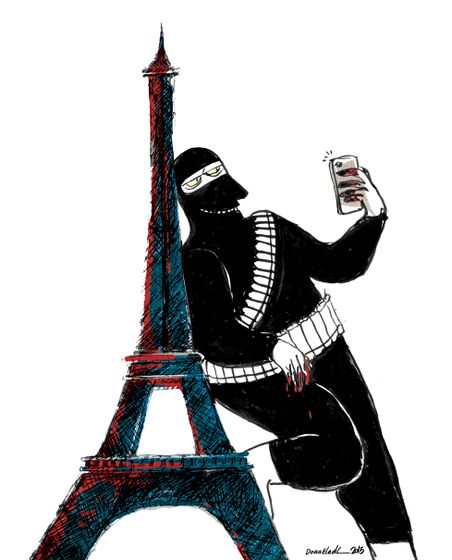 Italy’s Gianfranco Uber used the Tower and Lebanon’s national symbol to show that Paris and Beirut, which also suffered two ISIS suicide bombings this week, have much in common: 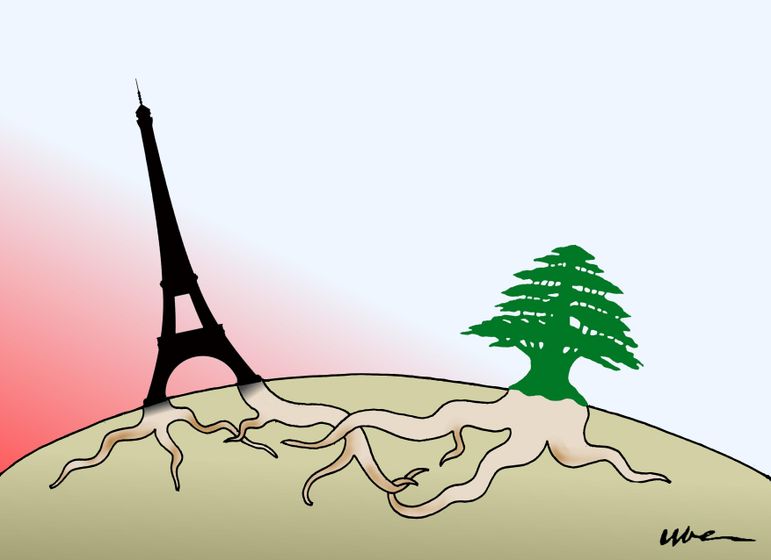 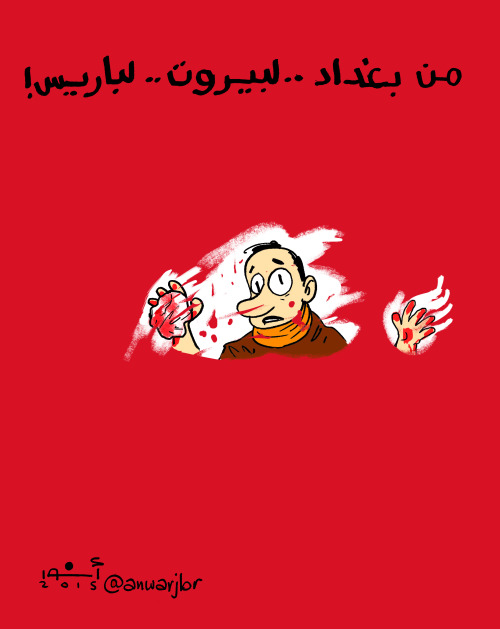 “From Baghdad to Beirut to Paris!”
Anwar, Egypt

While the Eiffel Tower has become an international symbol of France, the nation’s own identity is centered on Marianne, the personification of the Republic. In her Phrygian cap, she features in the cartoon by Jordanian Omar Al Abdallat at the top of this page, and in another by France’s own Anne Derenne: 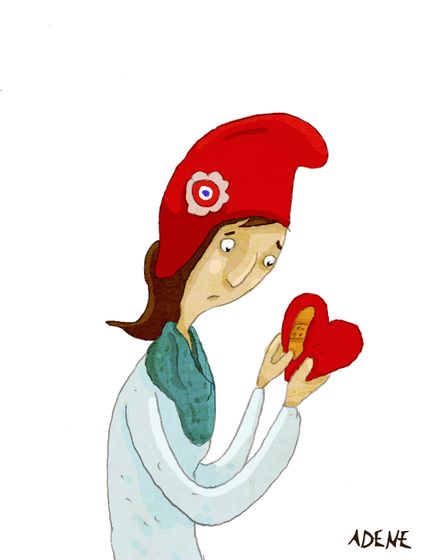 Another cartoonist from Jordan, Osama Hajjaj, adapted a specific version of Marianne from Delacroix’s painting “Liberty Leading the People“: 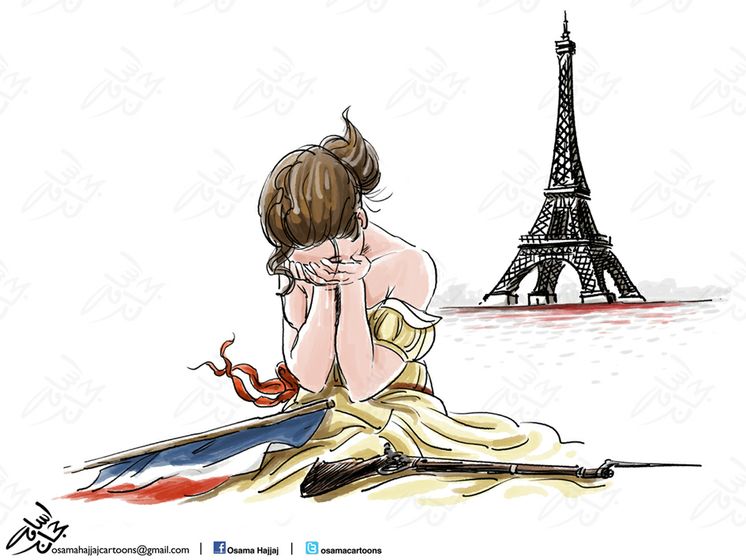 Italy’s Paolo Lombardi showed the gargoyles of Notre Dame watching in horror from their perch: 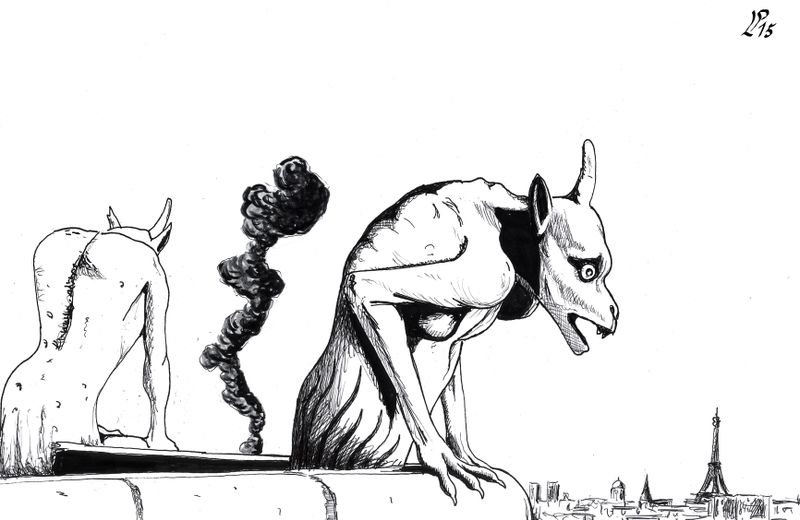 Another lesser-known symbol and rallying cry upon which Parisians quickly seized is the city’s centuries-old Latin motto, Fluctuat nec mergitur. This literally translates as “beaten by the waves, it does not sink,” but graphic novelist and sometime Charlie Hebdo cartoonist Joann Sfar had a more pointed interpretation: 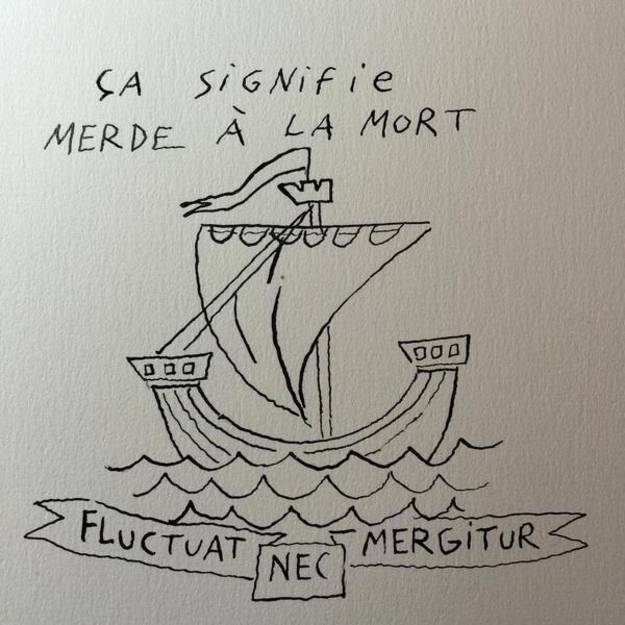 Sfar also responded in English to the #PrayForParis hashtag that quickly spread across social media. This panel was one of a series of 12 which he posted on Instagram. The rest are in French but can be found here with English translation. 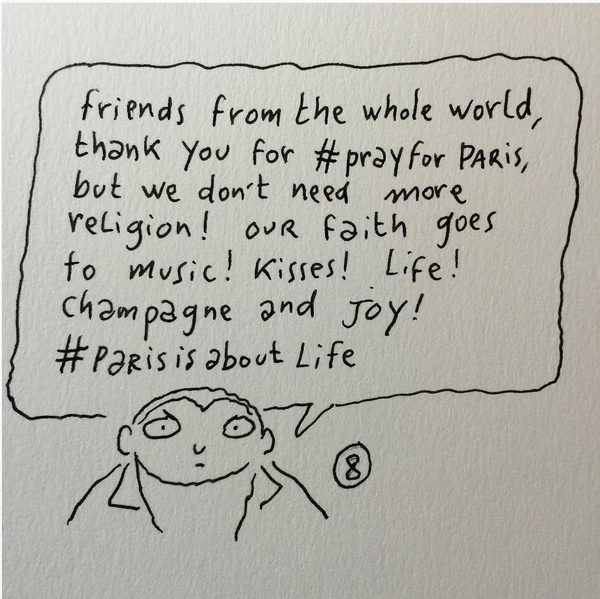 Finally, we’ll give the last word–or image, as the case may be–to Syrian cartoonist in exile Fadi Abou Hassan, who provided an illustration of what goes on in terrorists’ heads: 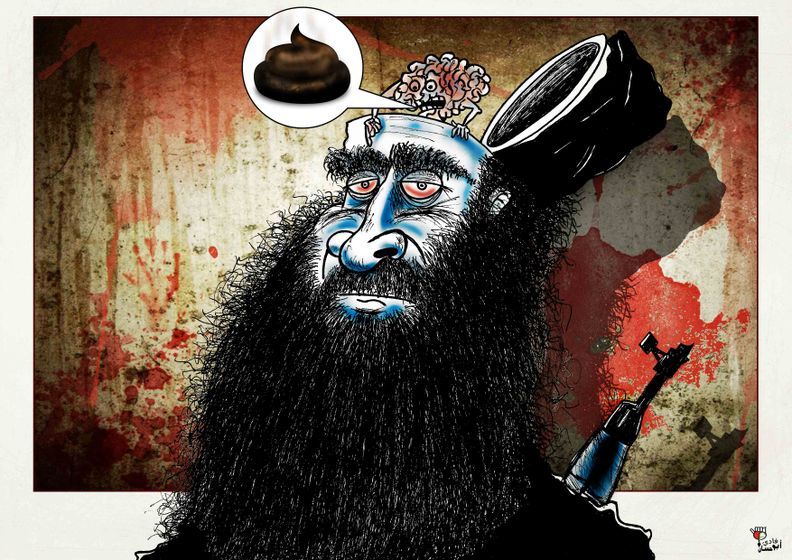 CBLDF stands in solidarity with the victims of the attacks in Paris and Beirut, as well as with the millions of innocents from Syria, Iraq, and other countries in turmoil who live in the midst of terror every day or who have struck out in search of safety elsewhere. “Those who love death,” as Joann Sfar labels them, will not triumph!