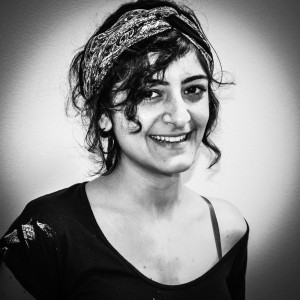 Graphic novelist Leila Abdelrazaq, who recently won critical praise for her book Baddawi, was detained by U.S. Border Patrol agents in Arizona for three hours last week after they spotted Arabic writing in her sketchbook. Abdelrazaq, a U.S. citizen of Palestinian descent, was released without charge but has since been smeared as a potential terrorist by certain online news sources.

Baddawi recounts the childhood of Abdelrazaq’s father Ahmad, who was raised in a refugee camp in Lebanon. Her next project also deals with “immigration and borders,” she told Salon, so she and two friends went on a sketching expedition to the U.S.-Mexico border near Nogales, Arizona. Border Patrol agents asked them to leave after just a few minutes of sketching facilities, but as they were in the process of complying the agents noticed Arabic writing in Abdelrazaq’s notebook. Raised in the U.S., she isn’t even fluent in Arabic, she explained: “Alongside my sketches, I included notes in both Arabic and English that poke fun at my choppy Arabic. I didn’t realize self-deprecation would get me in trouble.”

Border Patrol and Homeland Security agents ultimately concluded that the sketchbook did not contain any “derogatory information,” releasing Abdelrazaq and her friends after a few hours. But the story quickly took on a life of its own on right-wing blogs and news sites, with headlines like “Team Led by Middle Eastern Woman Caught Surveilling U.S. Facility on Mexican Border.” While she was certainly upset by being detained for words in a notebook, Abdelrazaq said that reaction in the aftermath was even more alarming.

Ultimately, she said, the incident served as a reminder that even U.S. citizenship does not always guarantee Constitutional protections in the moment, particularly in border regions:

Needless to say, the whole situation was absurd and Orwellian. As a U.S. citizen, you often operate on the assumption that your basic constitutional rights are going to be protected, but this incident was a chilling reminder that this is not always the case, especially if you are the ‘wrong’ kind of person, and you are in the wrong place at the wrong time.

Indeed, certain protections are suspended at international border crossings, which has caused major problems for travelers carrying digital or hard-copy comics in the past. Read up on our legal advice for such situations here.

← Will Eisner and the Mysterious Origin of the Graphic Novel
Humble Celebrates 10 Years of BOOM! with an EVEN MORE Massive Bundle to Benefit CBLDF! →