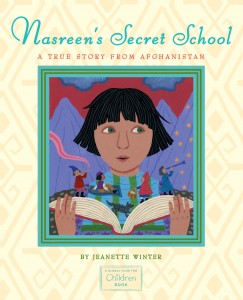 Some parents in Eau Claire, Michigan, are accusing the local school district of preaching Islam to students via the picture book Nasreen’s Secret School, which was also challenged earlier this year in Florida. The increased focus on the book is due to its inclusion in the state of New York’s K-12 curriculum, which is freely available online and has been adopted by other school districts across the country.

In Eau Claire (not to be confused with Eau Claire, Wisconsin, as some sources have done), the complaint centers around one line of dialogue in Nasreen’s Secret School, a picture book about an Afghani girl who attended an illicit school under Taliban rule when female education was forbidden. As Nasreen’s grandmother dropped her off at school for the first time, she later recalled offering up a private prayer: “Please Allah, open her eyes to the world, I prayed as I left her there.”

The Eau Claire parent rumor mill somehow turned that line from a book into third-grade students being required “to memorize an Islamic prayer.” Superintendent David Gray says they will do nothing of the sort, asking parents to be patient and give the newly adopted EngageNY curriculum a fair shake. “Please work with us, we think this [curriculum] is what is best for your kids,” he said in a segment on local news station WSBT. “But give us a chance to do it, so we can make sure we are doing it right.”

The latest controversy echoes another that arose this summer in Duval County, Florida, where some parents were wary of both Nasreen’s Secret School and another book by author Jeanette Winter, The Librarian of Basra. That latter is based on the true story of Alia Muhammad Baker, a librarian who spirited 30,000 books out of the municipal library in Basra, Iraq, in 2003, before the building itself fell prey to looting, arson, and bombs.

In light of the increasing challenges and controversies surrounding curricular materials related to Islam or the Middle East — including Marjane Satrapi’s Persepolis — our partners at the National Coalition Against Censorship recently released a new resource for schools called “Islam in the Classroom: Teaching About Religion Is Not Religious Indoctrination.” The superintendents in Eau Claire and Duval County have both steadfastly stood behind the books by Winter, and hopefully they and other educators can use this resource to help calm parents’ fears and dispel misconceptions!