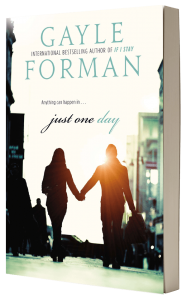 In a victory for the freedom to read, a review committee in Rosemount, Minnesota, has voted 7-4 to keep Gayle Forman’s Just One Day in district libraries.

Ben and Kandi Lovin, parents of a sixth grader in Rosemount, Minnesota, demanded the removal of Just One Day, citing “a graphic sex scene, underage drinking [and] date rape” as reasons for the removal. Erin Adler with the Minneapolis-based Star Tribune obtained the Lovins’ written challenge to the book, which demands the removal of the book from all Rosemount – Apple Valley – Eagan public school system libraries, not just the library of the middle school their daughter attends. In the complaint, the Lovins write:

A committee comprised of instructors, students, and parents in the system was assembled to review Just One Day. Nathan Hansen with the Rosemount Town Pages covered the review committee’s Thursday night meeting, sharing statements made regarding the challenge. Those in support of the book included secondary media specialist Dawn Lyons, who argued the work as a whole must be considered and pointed out that the book was a YALSA award winner in 2014. Lyons further described the responsibility of media specialists to their communities:

“Media specialists must consider the students and staff population we are serving,” Lyons said. “Our collection must include material for the most mature students as well as the younger students.”

Earlier this week, CBLDF joined the Kids’ Right to Read Project and other freedom to read advocates to defend Just One Day in the district. The letter reminded the review committee that “Removing the book from the library in spite of its clearly recognized value, and in response to subjective complaints about its content, would raise serious First Amendment concerns,” and urged the committee to retain the book.

The Lovins have the option to appeal the review committee’s decision, but reports do not indicate whether they will exercise that right. We’ll be watching the story and will post updates as they become available.