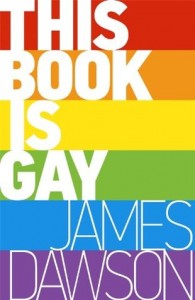 Back in September, a 10-year-old boy in Wasilla, Alaska pulled a young adult book called This Book is Gay off a shelf in the juvenile nonfiction section of the local public library. His mother, believing the book “too sexually explicit to have in the younger section,” filed a challenge asking for it to be relocated. After four months, two rounds of review, and one heated city council meeting, it has finally been decided that all of the library’s young adult nonfiction books–about 300 volumes–will now be shelved in the adult section rather than children’s.

While this may seem like a drastic step, it is actually an equitable solution that highlights the importance of properly classifying and shelving age-appropriate books in the first place. According to reviews from readers and professional sources alike, This Book is Gay by James Dawson is an exemplary and much-needed resource for teens. Here’s how the publisher describes it:

Inside you’ll find the answers to all the questions you ever wanted to ask: from sex to politics, hooking up to stereotypes, coming out and more. This candid, funny, and uncensored exploration of sexuality and what it’s like to grow up LGBT also includes real stories from people across the gender and sexual spectrums, not to mention hilarious illustrations.

There is no question that this book and others addressing teen sexuality across the whole spectrum of orientations and identities absolutely belong in library collections. Likewise, there are many LGBT-themed books for younger children that absolutely belong in the children’s section; just recently we’ve reported on attacks against picture books My Princess Boy, This Day in June, I Am Jazz, and The Family Book. But the two types of books are simply intended for very different audiences at different stages of development. In fact, shelving a vital resource like This Book is Gay amongst children’s books likely makes it less accessible to the teens who need it most, as they probably don’t browse in that section and may hesitate to deliberately search out books about sexuality there due to embarrassment or any number of other factors.

After Wasilla library director Kathy Martin-Albright reviewed the parent’s complaint and found that Dawson’s book was properly shelved–inasmuch as children’s and young adult titles were interfiled, and it definitely belongs with young adult books–the challenge was appealed to a review committee last month. By all appearances, the committee made up of a local independent bookstore owner, a high school librarian, and a representative of the public library’s Friends group approached the issue with sensitivity and respect for all parties involved, stressing that they wanted to make sure this book and others like it remain “in a place that teens can access and feel comfortable accessing.” But simply moving a single book, or even all the young adult sexuality books, from the juvenile section to adult would be a form of viewpoint discrimination–which is precisely what free speech advocates want libraries to avoid. Relocating all of the young adult books regardless of content was the best solution given the circumstances.

To highlight just how remarkable it is that Martin-Albright and the members of the review committee resolutely stood by This Book is Gay, consider how LGBT content has historically been treated by some public administrators in Wasilla. Shortly after Sarah Palin was elected mayor in 1996, she asked then-library director Mary Ellen Emmons “how I would deal with her saying a book can’t be in the library.” (A member of the city council who was present recalled that Emmons replied, “I would absolutely not comply with your request.”) Palin never filed a formal challenge to have any books removed, but the local reporter who covered the story at the time says that Emmons told him Palin specifically objected to LGBT-themed books held in the library.

More recently in 2011, Wasilla High School principal Dwight Probasco tried to bar the school’s jazz choir from singing “Bohemian Rhapsody” at graduation because at least one parent objected to Freddie Mercury’s sexual orientation. Probasco reversed course only after resourceful students threatened to contact the ACLU. With one segment of the community aspiring to that level of repression, we are glad that all teens in Wasilla can find the resources they need in the public library, from Emmons’ day to the present.

← VICTORY: Panel Votes To Keep The Muppets in Marshfield, WI
NCAC Investigates the Prevalence and Impact of Trigger Warnings →