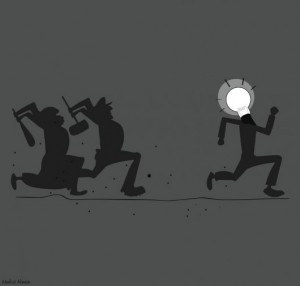 This month marks five years since the regional wave of uprisings known as the Arab Spring began in Tunisia. Both before and after the regime changes in that country, Egypt, and Libya, as well as ongoing civil wars in Syria and Yemen, political cartoonists throughout the Middle East and North Africa have risked their freedom and their lives to speak up about issues that matter to them. Angelo Boccato of the human rights news site Equal Times recently sat down with three of those cartoonists to talk about their fight for freedom of expression and their assessment of progress in the region.

At Italy’s Internazionale a Ferrara festival last October, Boccato spoke with Khalid Albaih, a native of Sudan exiled in Qatar; Hani Abbas, a Syrian-Palestinian exiled in Switzerland; and Nadia Khiari, a Tunisian cartoonist who created the acerbic cat character Willis from Tunis to comment on domestic and world affairs in the midst of her country’s relatively smooth transition. All three dismissed the idea that the Arab Spring has turned into an Arab Winter of continuing chaos and repression. Aside from the quiet success in Tunisia, where the alliance negotiating democratic reforms won the 2015 Nobel Peace Prize, Albaih says he sees a new flowering of artistic expression in the Middle East:

After the Arab Spring, everybody was positive and dying for free expression. Now with everything that’s happening, we are in transition, but also a lot of art is being produced. It’s a process and it’s happening and our job as intellectuals and artists is to help this change.

Even though none of the three are particularly enamored of Charlie Hebdo’s Mohammed caricatures, they also disagree with the jihadist attackers’ violent response and appreciate the debate about cartoons and free speech that arose in its wake. Says Abbas, who fled Syria in 2012 due to threats from security agents over a cartoon of a flower symbolizing the undying revolution:

I am very sad about what happened, as a colleague of the [Charlie Hebdo] victims. I think that the dialogue [about free speech] that took place afterwards is a very important one, in order to understand the mentality of the other, so that you can build on that.

Albaih also highlighted his belief that freedom of speech can be used to either “build bridges or widen the gap between people”–and he much prefers the former. Arab cartoonists, he says, “have died for reasons way less stupid than drawing the Prophet and historically the Prophet has been drawn. This is not the problem.” For himself and his regional colleagues, the risk has always been present:

We do cartoons not because we want to make funny gags. It’s a life and death situation for us, every day. If you want to make a joke, that’s excellent, but for us it’s not a joke, it’s our life.

Ultimately, Khiari says it’s imperative for the inheritors of the Arab Spring to continue using their hard-won right to speak out:

Freedom of speech is one of the only concrete victories of that revolution. We have been killed for decades. While we can speak and despite the attempts of silencing us, I exercise this fundamental right that has been earned at the price of many sufferings and human lives, in Tunisia or elsewhere. If we give up to fear, we’re lost.

Read the full interview at Equal Times, then check out a sampling of cartoons by Khalid Albaih, Hani Abbas, and Nadia Khiari.