A new initiative from Google Ideas, simply called Censored, invites users to a series of conversations with people who are fighting for their right for free expression. In Part 01 of the series, “Painting over the Bullet Holes,” Google Ideas Chief of Staff Dan Keyserling introduces us to graffiti artist Shamsai Hassani from Afghanistan and graphic novelist Saleiman Bakhit from Jordan — two artists who use unconventional artistic mediums as a way to incite public conversations about important topics like women’s rights and the necessity for powerful and positive role models in their respective countries.

Posted on Medium and done in collaboration with the Oslo Freedom Forum, Censored is part of Google Ideas’ larger project to “build tools against oppression” by allowing those who are on the frontlines to tell their story and how they are overcoming obstacles unique to their situation. More than just a soundclips of biographical exposes, Keyserling describes Censored as “a series of conversations with some of the world’s most prominent experts on the global fight for free expression and the role that technology plays on both sides of the struggle.” 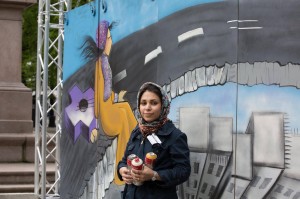 Shamisia Hassani, a 27 year-old woman who spent her childhood in exile in Iran after the Taliban forced her family and others to flee Afghanistan, is a classically trained painter who decided to adopt and use the art of graffiti as a way to share her message about women’s rights and to try and change how Afghani women continue to be perceived in the post-war country. Her canvas is her hometown of Kabul, and her subject is the woman in the burka. Often painting faceless women in bright clothes and unconventional profiles on walls riddled with bullet holes, Hassani uses her art to present a new view of women in the hopes that it not only changes her community’s perception of women, but the world’s. She does street art — the most public art form — “to remind people of women” and to make them “look at women differently.” And it’s working.

Although her work has been met with hesitancy and controversy, especially from older community members, the newer generation of Kabul very open-mindedly embraces this new form of communication. Hassani describes how their happiness when they view her art makes her happy and her hopes are that those feelings eventually override the negative ones that continue to torment her home — “I just want peace and justice for my country.”

She has been presented with obstacles, though. Her subject — the women in the burka — has been seen as continuing to propagate the negative image of Taliban oppression. Hassani clarifies that this isn’t the case. In painting the burka, she isn’t depicting oppression. In juxtaposition, the burka is just a piece of clothing and it is what is under those clothes that matter: “A burka isn’t a cage, if you take off a burka it isn’t freedom. Freedom is in the mind.”

Using street art has become a liberating form of expression for Hassani, and because it isn’t exactly illegal in Afghanistan it allows her to bring something new, controversial, and thought-provoking to her community. 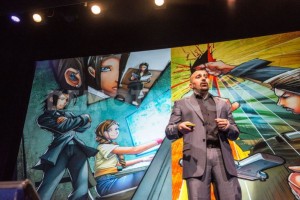 Saleiman Bakhit, the son of the former Prime Minister of Jordan, is a social entrepreneur who has dedicated his life to creating counter narratives in comic book form that combat the negative ones propagated by terrorist groups in the Middle East — narratives that youths in the region sadly often succumb to. A best selling comic book creator and the CEO of the Hero Factor Project, Bakhit returned to his home country of Jordan when he realized that the way to fight terrorism was by creating superheroes and narratives for his community that presented alternative role models to those offered by groups like Al-Qaeda. “In parts of the world, people grow up on Frozen, on Star Wars, on Harry Potter,” says Bakhit, “but I found out that in some areas of the Middle East [children] grew up on thinking Mujahideen and Zarqawi are the heroes they wanted to be.”

This was a problem. Whereas in countries like the United States, children are offered superheroes like Superman and Spider-Man in all forms of media, in the Middle East this is not the case. The media is filled with figures from ISIS and Al-Qaeda — groups that are actively using technology to recruit people. Bakhit recognized a dearth of the types of positive heroes that children could look up to and decided to use comic books as a way to change this.

“Comic books and graphic novels are the best technology that we have,” says Bakhit. Whereas terrorists use “shame” and the “trauma” of growing up in a war-torn region, Bakhit creates heroes based on relatable Arab mythology to propagate a positive message that celebrates being Middle Eastern.

The efforts that Bakhit has taken have been well received in Jordan and he has quickly become a spokesperson for free expression in the country. His goal is to use comics as a means to create positive figures that “people can model their lives after.” Despite the positive reception, though, Bakhit, like Hassani, still faces the challenge of changing people’s perceptions. Defending himself from attacks or actively putting himself in front of his opponents is part of what he faces in his mission to provide a newer generation with new possibilities and the tools to view themselves more than just bodies for terrorism.

“Bakhit and Hassani are both proving every day that freedom of expression isn’t just a right, it’s something you exercise, like a muscle,” Keyserling reminds us, adding:

Artists invent new vocabularies that give shape to the world around them, and here were two artist using spray paint and comics to reimagine their country’s violent history and leave it with portraits of itself – vivid, aspirational, and unfinished.

Check out a video of Bakhit’s speech at the Oslo Freedom Forum below, and listen to all of the Censored conversations here.