Brazilian political cartoonist Carlos Latuff may have become popular amongst the general population of Turkey, but the Turkish government will stop at nothing to still his pen. In a recent interview with Al-Monitor, the cartoonist discusses the implications of his work and what it means to be the first foreign cartoonist facing a legal ban in the country.

Although a native Brazilian, Latuff has become widely known for his cartoons depicting issues of the Middle East. From the Turkish Prime Minister Recep Tayyip Erdogan’s attempt to block Twitter, to the Israeli-Palestinian conflict, to his show of support for the Charlie Hebdo offices, Latuff isn’t afraid to take on these difficult subjects and bring fresh light to the issues citizens face in these respective countries. “The interest I have for Turkey is the same interest I have for other countries,” noted Latuff in the interview. “I am a political cartoonist, and international affairs is my specialty. The difference is that I have been to Turkey, as well as Palestine, and this is what gives me a more personal approach.”

Despite his attraction to Turkey and the plight of its people, though, the cartoonist recently got himself into hot water with the Turkish government. In December of last year, the Turkish authority issued an official notice blocking the website where he posts his cartoons — a demonstration of just how much the cartoonist has gotten under the Turkish government’s skin. “This ban is a clear sign that Turkey is everything but a democracy,” said Latuff, adding:

If you punish artists for mocking politicians, then definitely you do not have a democracy. I was entirely opposed to the ridiculous depictions by Charlie Hebdo of the Prophet Muhammad, but I have no problems criticizing or even making fun of opportunistic politicians like Sultan Erdogan. Of course you will have detractors who will accuse me of being an Iranian puppet or even a Zionist; this kind of laughable accusation was also made against me in Egypt when I criticized the military junta and now Sisi. Add to the list of nonsense accusations that I would be working for [Russian President Vladimir] Putin. My enemies have a fertile imagination. It is in fact a lack of argument — if you don’t agree with Erdogan, it is because you are an agent of Iran, Russia, outer space or whatever. 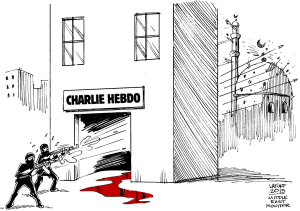 Although the Turkish government uses such bans to stifle negative images of Prime Minister Erdogan, for Latuff (and Turkish citizens), such action incites them to find more ways to speak out about human rights violations. “When I was in Turkey in 2010, I realized that I couldn’t access some websites by common means, but I also realized that people use software and apps to deceive the government block,” said the cartoonist when asked about why he chooses to draw Prime Minister Erdogan and what he thinks of the ban. “So I think people will continue to have access to my cartoons anyway. Sultan Erdogan is good for cartoons since he is a living caricature of an opportunistic, corrupt politician.”

Latuff isn’t stopping his work anytime soon and will sadly probably continue to be the target of the Turkish government. As Al-Monitor reports, though, “No human concern is too distant and irrelevant for him,” and that attitude will continue to fuel his efforts to make sure that all sides of a story are heard.

← For Myanmar Cartoonists, Satire is Both a Right and an Obligation
CBLDF Presents: WILL EISNER’S Personal Library Collection Auction! →