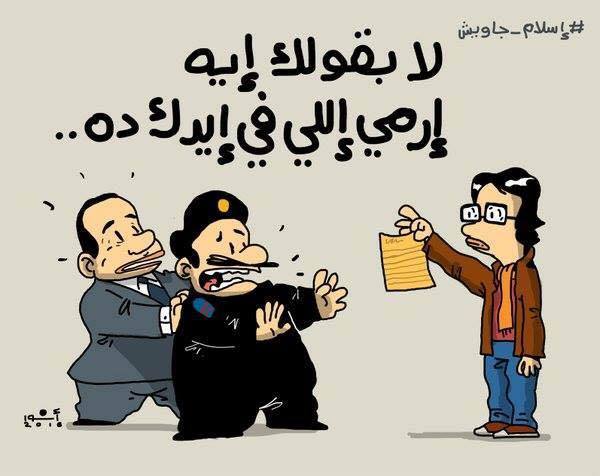 “Hey, no, throw away what’s in your hand.” Cartoon by Anwar in tribute to Islam Gawish.

In the aftermath of his overnight arrest last week, Egyptian cartoonist Islam Gawish is speaking out through media interviews to make clear that he will not be intimidated into stopping or modifying his work. In fact, he says the Sisi government would do well to consider the criticisms in political caricatures currently flourishing on social media, since they represent the views of disillusioned youth who are increasingly seeking opportunity overseas.

There are conflicting reports as to why Gawish was arrested on January 31, but one certainty is that his cartoons were at least an aggravating factor. The main allegation that sent police in search of him was that he was running an “unlicensed website.” Early reports indicated that the site in question was Egypt News Network, which Gawish does not administer, but in a more recent interview with Al-Monitor he said the “unlicensed website” was actually his Facebook page where he posts his cartoons. This is of course nonsense, he said:

Is any Facebook page licensed? I am not a legal expert, but if Facebook pages were in fact licensed, I would gladly apply for a license. But such is not the case, which makes this whole issue utterly laughable.

In the process of questioning him, authorities apparently found some of his cartoons and added an unofficial charge of drawing “anti-regime caricatures that mock symbols of the state.” After a flurry of domestic and foreign media coverage of his arrest, however, he was released the next day without any formal charges at all.

Gawish has a feeling that the arrest was intended as a warning to lay off political satire, but he remains convinced that the Egyptian constitution is on his side and that fellow cartoonists should continue working without fear:

An artist should not bother himself with [the need for] protection if he expresses his opinion objectively. I know that the situation differs depending on the country and the regime, but in my opinion, the Egyptian constitution provides for the protection of people’s right of expression and opinion. This provision is all that is needed to protect any caricaturist, including myself, or any citizen who expresses his opinions.

Immediately after his release from jail last week, Gawish was at the Cairo International Book Fair to promote his second collection of cartoons, Al-Waraqah Part Two. Since his arrest, he’s added about 100,000 Facebook followers to his already impressive tally, and we certainly hope the free government publicity also translates to a hike in book sales!