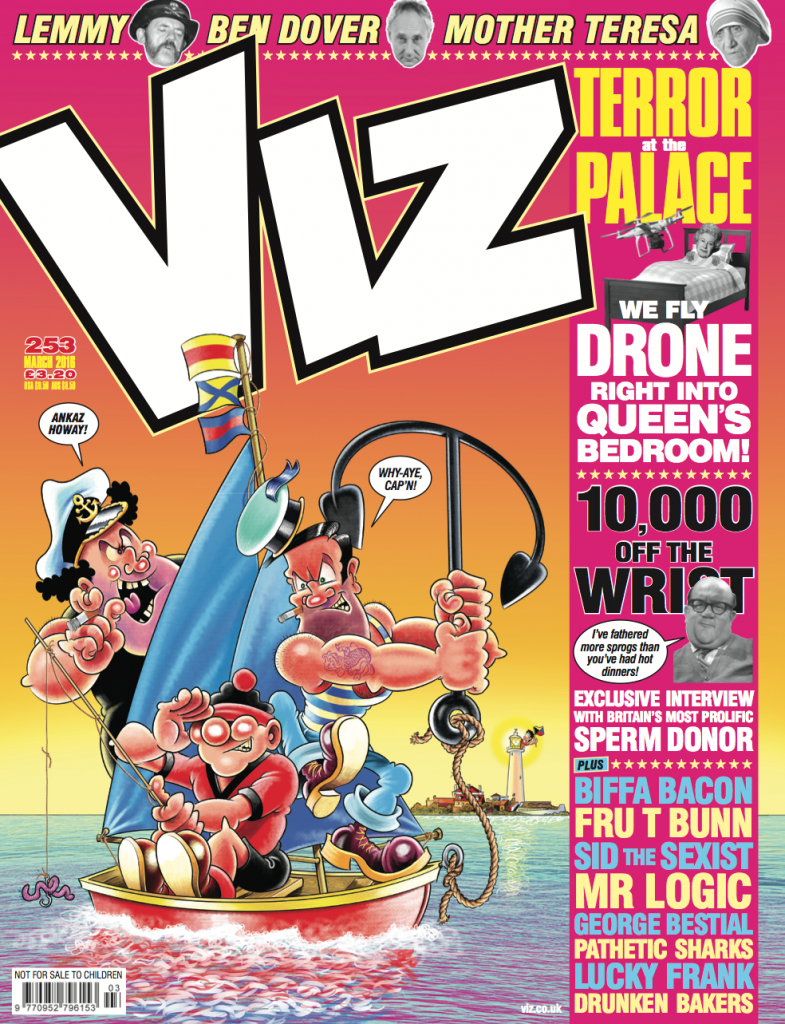 The satirical British comic Viz is back on Facebook after the social networking giant blocked its page and threatened it with a permanent ban for unspecified violations of “Facebook Terms and Community Standards.” The page was apparently restored on appeal, even though the only element changed by Viz was the Facebook cover photo, which now shows an idyllic scene of a puppy, a kitten, and a plate of fried shrimp.

Viz was founded in 1979 as a parody of children’s comics, and could be likened to a much more raunchy Mad. Characters from its recurring strips include Johnny Fartpants, Sweary Mary, Sid the Sexist, and Cockney Wanker. A scan of its recent Facebook posts finds plenty of profanity and off-color jokes, but absolutely no graphic sex or violence — not even nudity. So Viz editors were at a loss when they received this properly Orwellian notification from Facebook early yesterday:

Your page has been unpublished.

We work hard to prevent actions that compromise people’s privacy or security on Facebook, including contacting people for commercial purposes without their consent.

If you think your Page was unpublished in error, you can appeal. Before you appeal, we suggest removing any violating content from your Page. Please keep in mind that if your appeal is denied, your Page will be permanently deleted.

Of course, without the first clue as to what specific content on their entire page may have violated some point in either the Pages Terms or the Community Standards, Viz’s page admins were hesitant to click the “Appeal” button and risk losing the account forever. It’s not even certain that potentially offensive content was the problem; the same notification would be sent for any infraction from an alleged copyright or trademark violation (a familiar charge for publications like Viz that deal in parody) to choosing a Page name that does not “use proper, grammatically correct capitalization.”

Ultimately Viz did choose to appeal, however, and spent the intervening hours mocking up the new baby-animal-intensive cover photo. By late morning U.S. time, the Facebook page returned just as mysteriously as it had disappeared. “We’re back,” Viz announced wryly. “They wouldn’t tell us what we did, but we promise not to do it again, whatever it was.”

As always in cases of social media censorship, we acknowledge Facebook’s right to run its business however it wants. But as we’ve also mentioned numerous times before, just a modicum of transparency and open communication on Facebook’s part would certainly go a long way towards keeping customers happy. Instead of vaguely threatening pages like Viz or the Jeu de Paume Museum in Paris with permanent bans for posting content that they genuinely thought aligned with the Terms and Standards, Facebook would be well served by dedicating more staff to working with page administrators to at least point them in the right direction.