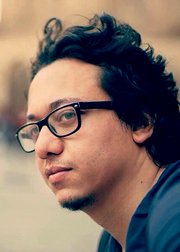 Egyptian cartoonist Islam Gawish was arrested on Sunday, allegedly for operating a website without government authorization, but was released yesterday without charge. Although his cartoons tend towards social rather than political satire, it appears an arresting officer found some of his drawings, which mildly mocked government figures, and thus “unofficially accuse[d] him of insulting the regime.”

Gawish has 1.6 million followers on his Facebook page, where he posts distinctive cartoons of stick figures on lined notebook paper. While he does embrace the relative freedom afforded by social media, telling Voice of America in 2012 that “if I take my political cartoon to a state-run newspaper, it would be censored and would never get published,” his work is reportedly not any more daring than the many cartoons found in the country’s independent print media outlets.

Gawish was officially arrested because authorities thought he was the manager of the website Egyptian News Network, which they say has been “publishing news without a license and using pirated computer software.” Gawish’s lawyer Mahmoud Othman said that in the course of the arrest, however, an officer found some of his cartoons and unofficially accused him “of using [means of communication] to spread anti-regime cartoons.”

As it turned out, the original justification for the arrest was erroneous: Gawish is not in fact the manager of ENN’s website. After he refused to sign a statement saying that he was, and prosecutors finally corroborated that claim, he was released without charge yesterday. Intense domestic and foreign media coverage from outlets including BBC, AP, and the New York Times may have convinced authorities not to pursue charges related to his cartoons once it became clear that the primary charges against him were without merit.

Egypt’s President Abdel-Fattah El-Sisi even called in to a live TV show on Monday night to deny that his administration ever had a problem with the cartoons, declaring that “I’m not upset at Gawish or anyone… No one can speak on my behalf and say that I get upset from criticism.” One person who might disagree with that statement is recent law school graduate and former soldier Amr Nohan, who last year was sentenced to three years in prison for posting a Photoshopped image of Sisi with Mickey Mouse ears on Facebook. More recently, authorities have arrested at least five administrators of Facebook pages which were being used to organize demonstrations around last week’s fifth anniversary of the Tahrir Square uprising.