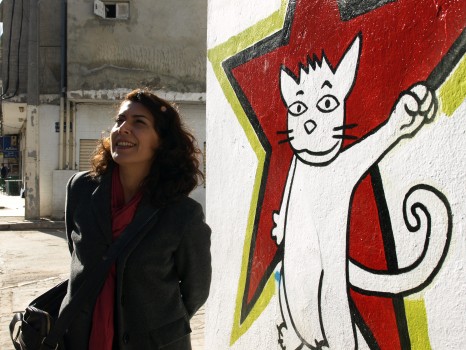 This year’s Festival International de la Bande Dessinée in Angoulême, France, stirred up quite a bit of controversy in the comics community, but one FIBD story has largely flown under the radar. That would be the decision not to give out a Freedom of Expression Award, founded with much fanfare just a year ago in honor of the Charlie Hebdo staff members who died in the attack a few weeks prior. When the festival program was announced this year, organizers said they had decided the award could be “too dangerous for the winner” and thus would remain unbestowed. In sharp disagreement with this reasoning, organizers of the concurrent alternative/small press Festival Off founded their own award for artistic courage, cheekily shaped like a set of testicles.

In a further rebuke to the main festival, which was boycotted by some over the absence of women among 30 nominees for the festival’s Grand Prix, the first annual “Couilles au Cul” award went to a woman: Tunisian cartoonist Nadia Khiari, creator of the radical cartoon cat Willis from Tunis. Khiari started drawing Willis in January 2011 just after her country’s dictator Zine el-Abidine Ben Ali was peacefully deposed, touching off the wave of Arab Spring uprisings which followed elsewhere in North Africa and the Middle East. Although Tunisia’s transition has been relatively smooth compared to Syria, Libya, Egypt, and Yemen, Khiari is determined that her fellow citizens should continue to hold their government accountable and not take their freedom for granted. Through Willis cartoons on Facebook, where she has over 44,000 followers, Khiari comments on everything from police beatings of detainees to chaotic traffic in Tunis. The cynical cat also features in her book Manual for Perfect Dictators, which she explains was inspired by the apparent short memories of some Tunisians:

I started thinking about it in December 2014 around the presidential elections. I heard a lot of people who were nostalgic for Ben Ali explaining that things were better before as far as the economy and security. Explaining that, sure, Ben Ali ‘stole a little bit….’ It drives me crazy to hear things like that. I thought to myself that maybe people had forgotten. So, I wanted to prescribe a shot of memory.

In contrast, Khiari says she could “never forget what a regime can do to its people,” having witnessed the brutal suppression of riots over bread prices from the window of her childhood home in Tunis in 1984. With that memory of “young people in a sea of blood,” Khiari says she will always side with those who value liberty over state security.

Accepting the “Couilles au Cul” award — which literally translates as “balls at the ass,” e.g. exceptionally large ones — Khiari joked that she was only “disappointed they’re not made of gold.” Moreover, she couldn’t resist pointing out that “this part of the masculine anatomy representing courage and virility is in fact quite vulnerable in a fight.” Nevertheless, she expressed her gratitude to the Festival OFF for picking up the free expression thread where FIBD dropped it.

Another bright spot from Angoulême, but not from the main festival, was the announcement of a new nonprofit group called Dessinez Créez Liberté (Draw Create Liberty), which aims to promote dialogue and freedom of expression among young people. The project is a joint venture of Charlie Hebdo, the anti-racism group SOS Racisme, and the high school student union FIDL. The first event from Dessinez Créez Liberté is an exhibit of drawings produced by children and teens in reaction to the Charlie Hebdo attack. After its debut in Angoulême, the exhibit will now travel to 10 cities throughout France with the goal of encouraging young people to “draw and create, laugh and reflect, live and debate without fear.”