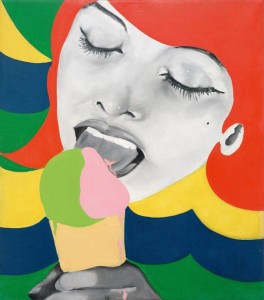 Earlier this month, the museum launched an ad campaign on the social media site for their new exhibit “International Pop” using artist Evelyn Axell’s 1964 painting Ice Cream as the main image. Quintessentially pop art, the brightly colored piece shows a close up of a young woman’s face licking an ice cream cone. According to curator Erica Battle, the painting was chosen as the exhibit’s lead marketing piece “because it speaks to so many themes found throughout Pop: consumption, pleasure, and seduction.”

Shortly after being posted, though, the image was taken down by Facebook for “containing excessive amounts of skin or suggestive content.”

This isn’t the first time that Facebook has used their nudity policy to remove controversial images from their site. From cartoon nipples, to Gustave Courbet’s notorious painting L’Origine du monde, to Orijet Sen’s whimsical nudes, to photographs of a national treasure in Copenhagen, to a book trailer featuring Renaissance artwork, the site has in multiple instances exercised its right to regulate content, but often in selective and concerning ways.

Unlike these other cases, though, where nudity was the straw that “broke” the social media giant’s content policies, it wasn’t the explicit depiction of the female body that led the site to take action, but the suggestion of sexuality. “It’s a metaphor for sexuality, and yet that seems to be even more uncomfortable than a literal image of a naked body,” Battle told the Observer.

Facebook hasn’t had the last word in this case, though. After the removal of the image from the museum’s page, the institution retaliated by reposting the image with a comment explicating asking “what are your thoughts about Facebook’s decision removing this image?”

Since its initial repost on February 5, the page has received over 1,000 likes, 240 comments, and 450 shares. “[The work] can still be provocative in a productive way. It’s such a great vehicle to have a discussion about what the politics of looking are,” said Battle, adding:

The response to her work on Facebook reflects how these themes interweave to form a complex, probing investigation into social politics that is incredibly relevant to today’s digital world in which we are all compelled to share and comment on images of all kinds.

The fact that Facebook hasn’t taken action a second time is a good sign that they see the ridiculousness of the initial response to the piece, but Battle reminds us that even in this day and age a painting from the 1960s showing a woman “doing something as common and everyday as enjoying a dessert” can provoke conversations.