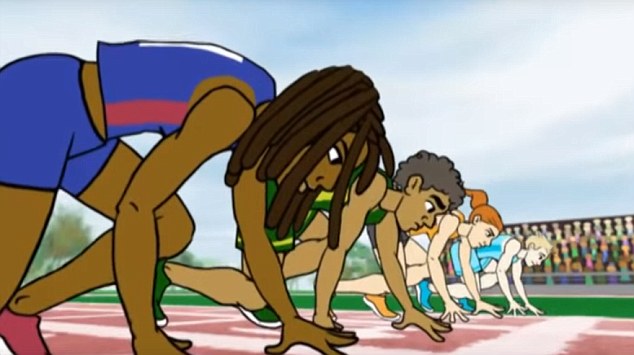 A Virginia school district has banned a 4-minute animated video that explains structural discrimination and affirmative action after some parents complained that it was “divisive” and cultivated “white guilt.” The video was shown to students at Glen Allen High School earlier this month as part of a longer Black History Month presentation.

School administrators had invited speaker Ravi K. Perry, a professor at Virginia Commonwealth University in nearby Richmond who also happens to be president of the National Association for Ethnic Studies, after a racially charged incident at a home football game last October. As the GAHS team faced off against the primarily African American team from John Marshall High School, someone managed to broadcast about 15 seconds of a racist parody of the DuckTales theme over the sound system.

Hoping to promote dialogue and help students to understand the history and lasting effects of racial discrimination, GAHS Principal Gwen A. Miller and her staff worked with Perry to create a 30-minute presentation that was shared with about 2,000 students in early February. The video, produced by the African American Policy Forum and titled “Structural Discrimination: The Unequal Opportunity Race,” was only one component of the assembly, which also gave students the chance to ask questions and offer their own viewpoints.

The animation explains structural discrimination in terms of a foot race in which two white runners compete unhindered, while two non-white runners are held back by obstacles that symbolize “real-life barriers to success, such as discrimination, poor schooling, standardized tests, racial profiling, the school-to-prison pipeline and housing discrimination.” The video is freely available online.

By all accounts from Perry and students who attended the assembly, they had a productive discussion and the video did not seem to raise much rancor at the time. But when parents later heard about and watched the video, some of them accused it of perpetuating divisions between races. One student’s grandfather labelled it “a white guilt kind of video” and demanded that “somebody should be held accountable for this.”

After initially defending the video as “one component of a thoughtful discussion in which all viewpoints were encouraged,” Henrico County Public Schools officials changed their tune after the story began to spread nationally. School board chair Micky Ogburn issued a statement saying that “school leaders have been instructed not to use the video in our schools” — apparently without following district policy on reconsideration of instructional materials — and that officials were also taking steps “to prevent the use of racially divisive materials in the future.”

The story may not end there, however. More than 260 people have signed a Henrico High School alumna’s online petition asking the school board to rescind its apology for allowing the video to be shown, and “to commit itself more fully to enlightening the next generation.” Even one of the most vocal critics of the video, local conservative radio host Craig Johnson, strongly feels that censorship was not the solution:

Our students need to become critical thinkers. We cannot bubble wrap our students and protect them. They can no more ban this video than they can ban the cold weather outside. All the kids have smartphones.

In fact, his position on the issue is not too distant from that of the African American Policy Forum, the group which produced the video in the first place. In a statement on its website, the AAPF encouraged the district to continue the multifaceted dialogue that GAHS Principal Miller was trying to cultivate when she invited Perry to speak:

Other options are surely available to those who are made uncomfortable by the video. The School District could have encouraged teachers to facilitate a dialogue so that those who disagreed with the content of the video could explain what they perceive to be its shortcomings. Educators adopt that pedagogical approach all the time. Indeed, the fundamental purpose of the video is to offer alternative perspectives about the significance of our history in order to encourage informed debate about what should be done about contemporary racial inequality.  That [School Board Chair] Ogburn chose censorship over robust engagement  denied students access to the very thing schools are supposed to provide–the opportunity to learn and engage in the robust exchange of ideas.

Hopefully Henrico County Public Schools will reconsider the rash decision to shut down discussion on a controversial topic as soon as a few parents felt uncomfortable. Students must have the opportunity to form their own opinions on issues that affect us all.

← Dynamite Entertainment and Humble Bundle Expands for Charity, Including CBLDF!
CBLDF Relocating to Portland, Oregon, in 2016 →