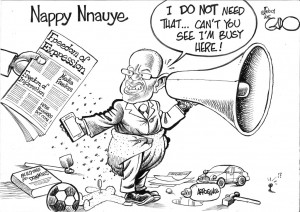 After decades of doing work for Kenya’s largest newspaper, the Daily Nation, the celebrated and most syndicated cartoonist in East and Central Africa Godfrey Mwampembwa (better known as Gado) has been fired due to suspected political pressure from the Kenyan government.

Gado, who is regarded by fellow cartoonists to be the “most important cartoonist in Africa,” has illustrated the turbulent political climate of East Africa for 23 years, often focusing on the dwindling state of free speech in countries like Kenya. “I think that freedom of expression of the media in Kenya has been on the right track until recently,” said the cartoonist in an interview with Financial Times.  “We’ve seen fight back from this administration. They’ve complained bitterly about lots of thing about me–I’ve no problem about that–but what we have seen with the current administration is that they have been trying to roll back the gains that had been achieved in the past.”

In 2013 a change in the government led to the implementation of new laws that specifically targeted journalists’ and cartoonists’ abilities to speak freely about the Kenyan government. Under a law passed in October, anyone who was found guilty of “defaming” the Kenyan Parliament could be fined up to $5,000 (USD) and face two years in jail. Gado himself has been under pressure since the change in the government, being forced to take a sabbatical in 2015 after the Tanzanian president, Jakaya Kikwete, expressed upset over one of the cartoonist’s pieces. Gado told the Committee to Protect Journalists:

It is no secret that there were many in government who didn’t like my cartoons over the years. But we had grown used to that and the Nation thankfully consistently pushed back. Things changed in 2013 after a new government came into place and the pressure became far more intense. I have no doubt that the Nation crumbled, which is quite sad and should be seen in the broader context of efforts by those in government to control the press. 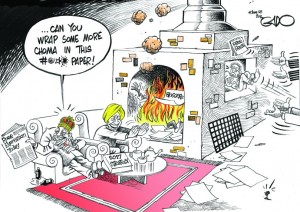 Once his year-long sabbatical ended on February 28th, the Daily Nation opted not to renew Gado’s contract. Although the Kenyan government denies that they had a hand in the newspaper’s decision to let Gado go, the concerning state of free press and recent laws implemented in Kenya suggests otherwise.

Despite being let go, the cartoonist is dedicated to continuing his work independently and plans to sue the Nation for unlawful termination. In an interview with Sahara Reporters, Gado reminds us and other cartoonists in similar situations that “I have freedom of choice, I will always find a way. Some subjects are tough; you struggle with them but in the end you always find a way to draw and add humor.”

← Swastikas Removed From High School Production of The Producers
Support CBLDF At C2E2! →