A cartoon by Kanika Mishra, drawn in response to a controversial statement made by Indian Minister Maneka Gandhi about the inability to criminalize marital rape, has been pulled from Facebook for not adhering to “community standards.”

The award-winning cartoonist has been the victim of death threats and garnered the ire of many Indian men due to her outspoken stance on the abuse of women in her home country. “Karnika believes that women have equal rights to speak on every social and political issues in country and being a women, she is more sensitive about issues related to women,” is how the artist describes her cartoon character on her website. Whether criticizing guru Asaram Bapu for his dismissal of sexual assault — the inspiration for her recurring cartoon character Karnika Kahan — or addressing Minister Gandhi’s statements that marital rape cannot be criminalized in India because “the concept of marital rape doesn’t exist in the Indian context,” Mishra sees her art as an opportunity to speak out about the abuses women suffer in India. “Why is it so easy to threaten women in this country?” asked Mishra in her profile for Humans of Bombay. “Why don’t we have any freedom of speech? Why do political idols and personalities feel like they have the power to control everything?” 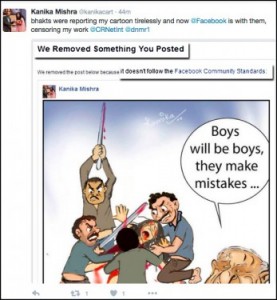 Despite the challenges that the cartoonist faces at home, she didn’t expect Facebook to be a space she wouldn’t be able to use to share her voice. “Social media is the only medium from where I distribute my cartoons and my cartoons enjoy a huge following,” Mishra told Cartoonists Rights Network International, adding:

But in the last few months, after I made cartoons on JNU students’ row, I find that lots of so-called nationalists and patriots are reporting my cartoons on Facebook. They were also abusing me on my wall but it doesn’t seem enough, now they are after my social media accounts and want to close these down.

Although the social media giant is within their rights to establish content policies, many people have expressed concerns over the seemingly arbitrary enforcement of these policies and how it impacts people’s rights to freedom of expression. Mishra asks, “Facebook seldom removes abusive comments or blocks such people — but why are they so quick to remove my popular cartoon, which only shows the sad reality and is based on 100% truth?”