Since the blocking of two of his cartoons on Facebook, Indian graphic novelist Orijit Sen had made it a personal mission to find ways to provoke audiences and inspire conversations. He spoke with Hindustan Times, discussing how Art Spiegelman’s Pulitzer Prize-winning graphic novel Maus helped inspire him to get into art and his feelings on how a culture of fear is shutting down people’s ability to freely express themselves.

Last year the artist decided to challenge Facebook’s controversial nude policy by posting a cartoon entitled “Punjaban,” depicting a woman dressing herself in traditional Punjab clothing. Clothed except for her top, the high-heeled, whip bearing image was quickly pulled down from Facebook for violating community standards. “The social network has a no-female-nipple policy, but nude artworks are supposedly fine. I decided to test them out,” said Sen.

Although “Punjaban” was restored to his profile page after an outpouring of support, Sen decided to test the limits again and intentionally provoke Facebook by posting another nude cartoon, “She Came in Through The Bathroom Window.” This piece, too, was removed and has yet to be restored, but Sen didn’t see this as a failure. 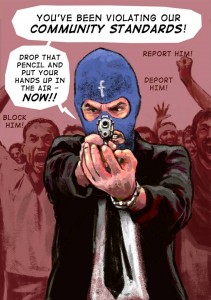 Rather, he used this second act by the social media giant as an opportunity to speak out further about censorship by posting another cartoon, “Busted by the FB-I…” Brandishing a gun, a man in a suit and ski mask with the Facebook logo in the center declares, “You’ve been violating our community standards. Drop that pencil and put your hands up in the air—Now!!” In the background, Sen shows a crowd of people calling to “block him,” “report him,” “deport him,” all phrases that have become part of the social and political rhetoric used to suppress speech. According to Sen, “Busted” is part of his larger plan to incite conversation about controversial expression. “I intend to do more such work,” the artist states.

This isn’t the first time Sen has addressed hostile atmosphere surrounding free expression in India and around the world. In an interview with The Caravan earlier this year, the artist talked about the alarming trend of self-censorship in India due to a fear of reprimand. “That’s when the idea of self-censorship really got me thinking about the dangerous trend,” says Sen, adding:

Self-censorship is like a termite eating society from within. Once people have got that fear in their heads, that they cannot speak about certain things, that they’re better off keeping their mouths shut, that they’re afraid to say things — that’s when the battle has been lost.

In order to not lose the battle for free speech and to inspire others, the admittedly rebellious Sen sees it as his duty to inspire controversial conversation so that others might be able to speak their minds, too. “People are creating an atmosphere of fear so that other people shut up even before they say anything,” Sen told the Times. “I am Hindu, upper caste, educated and a man — I have all possible safeguards a person in India can have. If I don’t speak out, who will?”