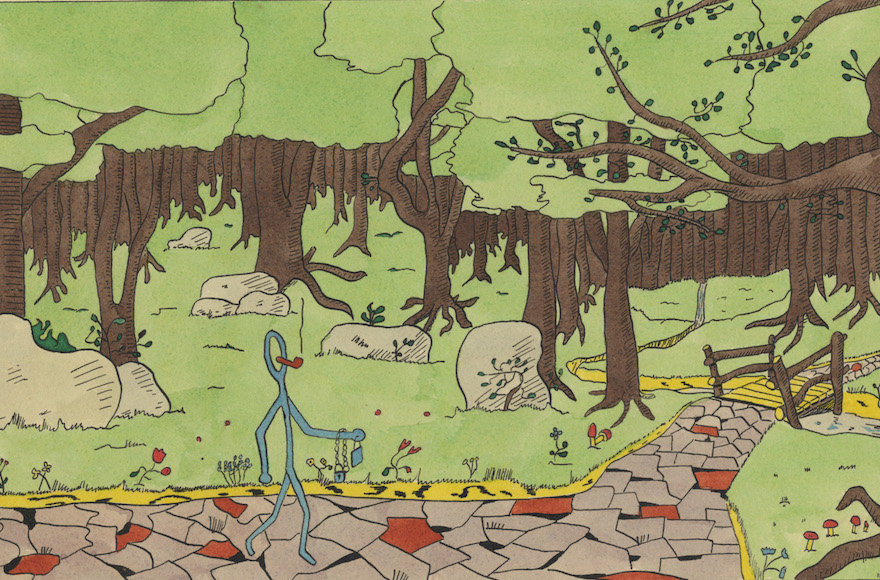 While hiding in a Dutch attic for more than two years during World War II, Emmanuel Joels passed the time creating a comic week by week and sending it to his girlfriend Hetty van Son, also hiding just a few miles away. Over 70 years later, the now 97-year-old Joels finally saw his three-volume series Dompie Stompie Metal Wire Man published this year.

As Dutch Jews, Joels and van Son were relatively lucky — more than 75% of the Jewish population in that country did not survive the Holocaust, including many of their own family members. Although they both found sanctuary with families in the town of Apeldoorn, they were unable to see each other the entire time. To make matters worse, Hetty was suffering from tuberculosis when they were forced into hiding.

To keep both of their spirits up and to while away the hours, Emmanuel created full-color escapist comics starring Dompie Stompie, a stickman detective made out of wire. Each weekly installment was shuttled to Hetty’s safehouse by Geeske Schurink, the then 7-year-old daughter of the family sheltering Emmanuel.

The two were married after surviving the war and had two daughters, Jet and Marian. While helping their parents move into an assisted living facility a few years back, they were amazed to find the complete adventures of Dompie Stompie in a box at the back of a closet. Their parents had never talked much about their experiences during the war or the family they lost in the Holocaust, they said, but their father did often tell Dompie Stompie stories around the dinner table. Hetty passed away last year, just a little too early to see her husband’s creation published.

For Jet, the amateur comic represents resilience in the face of despair and repression. “It’s a nice family story,” she says, “but it’s also a story of the incredible willpower of my parents and their whole generation not to succumb to darkness even when resisting it seemed pointless.”

When Dompie Stompie was finally published last month, the very first copy went to Geeske Schurink, who acted as the courier between Emmanuel and Hetty so many years ago. The original work is currently on display at the Amsterdam’s Jewish Historical Museum, where curator Irene Faber calls it “an illustration of stubborn bravery.” We would add that it’s a symbol of the inimitable power of comics to help people communicate, overcome adversity, and express themselves in tough times.

← Egyptian Parliament Outraged by Puppet’s Insults
The Guardian Recommends the Perfect Starter GNs for YA Readers! →