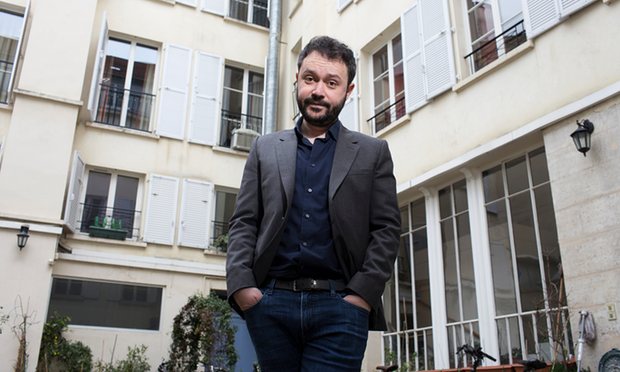 Riad Sattouf, Franco-Syrian creator of the universally lauded graphic memoir The Arab of the Future, is an uneasy symbol of the intercultural tensions currently roiling Europe and the Middle East. A longtime contributor to Charlie Hebdo and until 2014 the magazine’s only regular cartoonist of Arab descent, he has frequently been asked to explain issues he cannot comprehend himself. In a recent interview with The Guardian’s Rachel Cooke, he discussed his survivor’s guilt after the Hebdo massacre and his sense of belonging in the international community of cartoonists.

Sattouf first drew the attention of Charlie Hebdo when a private citizen filed a complaint with a rarely-used censorship board for children’s literature regarding his books Manuel du puceau (Manual for Virgins) and Ma circoncision (My Circumcision). The challenge was not prompted by the titular subject matter, but by alleged anti-semitism in the two books. At least in the latter case, a memoir of the author’s own circumcision carried out in Syria when he was eight years old, the “anti-semitism” is directed at Sattouf by schoolyard bullies, even though neither he nor his parents are Jewish; the bullies simply know that he’s different due to his fair hair and poor Arabic, and have been raised to believe that “Jew” is the worst insult imaginable. In context this scenario, which he also recalls in The Arab of the Future, obviously is intended to highlight the absurdity of all forms of othering including anti-semitism, but the complainant alleged that the books should not be sold to minors.

Fortunately the censorship board dismissed the complaint, and Sattouf also got a new job out of the ordeal: Charlie Hebdo approached him about doing a regular strip for the satirical magazine. For the next ten years he produced La vie secrète des jeunes (The Secret Life of Youth), a slice-of-life feature largely based on conversations he overheard on the streets of Paris. His last strip ran in the summer of 2014, but even when he was contributing to the magazine he always worked from home and would not have been in the office when the attack happened in January 2015. Nevertheless, he told Cooke more than a year later that he still feels guilty and “unable to grasp what happened. It’s hard for me to analyse.”

Sattouf also reiterated a sentiment he has previously expressed in other interviews. Having grown up in France, Libya, and Syria, he does not feel completely at home in any one country. But he has found an international community where he belongs, he says:

When I was a teenager I decided to choose for myself another people. I refused France, and Syria. I chose cartoonists. When I meet cartoonists from Japan or Russia we have the same problems, the same ideas. This is true, and I feel it very deeply.

Read the full interview with Sattouf here. The first English-language volume of The Arab of the Future is out now, and the second will be released on September 20.

← Kanika Mishra: Social Media as a Vehicle for Free Speech and Empowerment
“Creative City” Censors Creativity Due to Pornography Concerns →