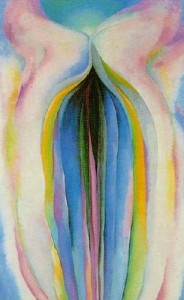 A substitute teacher in Battle Creek, Michigan is out of a job after her lesson on the art of Georgia O’Keeffe unexpectedly fell afoul of a school district sex education policy last week. Allison Wint is not contesting her dismissal, but says she was unaware that simply uttering the word “vagina” without prior notification to parents is forbidden in Harper Creek Community Schools.

Wint, a long-term substitute art teacher at Harper Creek Middle School, last week discussed “historical interpretations of Georgia O’Keeffe’s paintings” as part of an 8th grade lesson. Any adult with a passing knowledge of the subject is likely aware that O’Keeffe’s extreme closeups of flowers have often been seen as a feminist counterpoint to centuries of phallic imagery in art, although the artist herself rejected that interpretation. In any case, it’s an interpretation that would be difficult to ignore in a forthright discussion of O’Keeffe in historical context.

Wint says that she would have skirted the topic, though, if she had only known that saying the word “vagina” apparently turned her art history lesson into a reproductive health lesson which district officials say should have been treated according to the relevant policy, 2414. It defines reproductive health as “that state of an individual’s well-being which involves the reproductive system and its physiological, psychological, and endocrinological functions” and says that parents must be notified of any reproductive health instruction ahead of time, be allowed to review the materials, and have the option for their child to be excused from the lesson.

After packing up her classroom last Friday, Wint told a reporter from local news station WWMT that while she does not hold a grudge against the school district, she “honestly had no words” in response to the firing, “because I’ve always been an advocate of not censoring art and music and writing.”

This is not the first time the word “vagina” has been the focus of bureaucratic anxiety in Michigan. In 2012, State Rep. Lisa Brown was temporarily barred from speaking on the House floor after she said during debate over an abortion bill that “I’m flattered that you’re all so interested in my vagina, but ‘no’ means ‘no.’” Brown’s legislative colleague Rep. Mike Callton later claimed that her words were “so offensive, I don’t even want to say it in front of women. I would not say that in mixed company.”

Shortly thereafter, Brown and 10 female colleagues performed Eve Ensler’s The Vagina Monologues on the Statehouse steps before an audience including the playwright herself and about 2,500 Michiganians in mixed company.