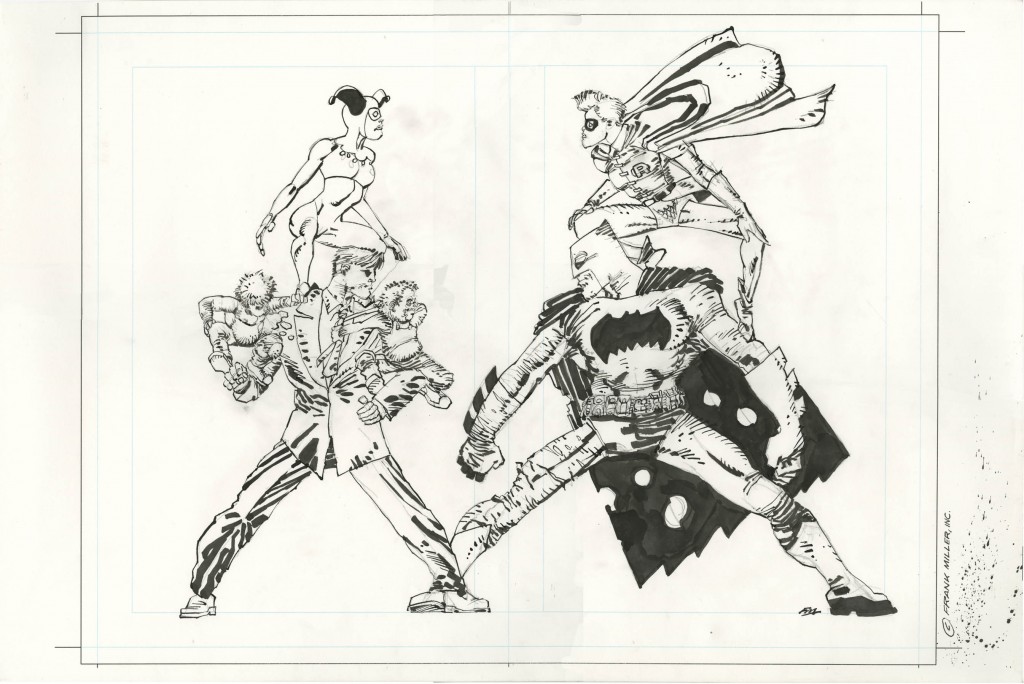 You now have the extremely rare chance to bid on an original piece of art by Frank Miller! In an auction that just launched via ComicLink, the original illustration features Batman, Robin, Joker, and Harley Quinn, and all proceeds from the auction will benefit CBLDF’s fight for the right to read!

This is a unique chance to bid on an illustration by one of the masters of modern comics. From the auction website:

ComicLink & ComicSketchArt.com/EssentialSequential are proud to partner together with Frank Miller Inc. to offer this hand drawn Original Commission from the personal collection of Frank Miller at No Reserve Auction. At Frank’s request, 100% of the proceeds will go to CBLDF. This item was specifically created by Frank for this auction and is actually the first time he has drawn a detailed Harley Quinn in a large commission or published format. Harley began life in the acclaimed Batman: The Animated Series in 1992 as a sidekick of the Joker and has become one of the biggest characters in all of comics in recent years. Miller’s depiction of her in this piece along with the Joker, Batman and the Carrie Kelly version of Robin, as the three later characters are depicted in Miller’s legendary Batman: The Dark Knight Returns, makes this a unique offering that stands out from any other Dark Knight art Miller has ever created. It’s perfect for a fan of both the Dark Knight series and Harley Quinn.

The most innovative and brilliant creator of the last four decades, Frank Miller first made a name for himself in the early 80s when he reinvented superhero comic books with his noirish work on Daredevil. When it was announced he would work on a Batman series in 1986, expectations were high, but Miller stepped up his game and delivered a work for the ages: Batman: The Dark Knight Returns. This 1986 mini-series was a complete game-changer, introducing a completely original artistic vision and a form of hard-hitting storytelling that was new to the medium and inspired thousands of stories since. Certainly one of the most innovative parts of the work was the introduction of a young girl as Robin and the way Miller portrayed the relationship between the unlikely duo of the older Batman and young Carrie. Miller’s vision of an older Joker was also completely unique and inspired Academy Award winning actors Jack Nicholson and Heath Ledger when they portrayed the character on screen. The combination of Miller’s revolutionary art and storytelling showed the world beyond hardcore comic book fans just what superhero stories could do. The series originally published in four issues, was an immediate sensation, garnering a lot of media attention and becoming the first superhero story to go back to press multiple times to meet demand. The various collections of the story have been best-sellers for close to three decades.

With a best-selling third Dark Knight series now in stores and the latest movie version of Batman, Batman v Superman: Dawn of Justice featuring an older Batman that is clearly the most Miller-inspired version yet, there’s no question that Miller’s Dark Knight will continue to be a massive influence on comics as well as the broader popular culture that surrounds the comic book world. Miller’s influence on major comic book-based blockbuster movies will continue for years to come. The Joker, now portrayed by a third Academy Award winning actor, Jared Leto, and Harley Quinn will appear in the upcoming Suicide Squad movie that looks like it builds off of the dark approach to the DC Universe that Miller popularized in the 80s. It has also just been announced that Ben Affleck will direct and star in his own solo Batman movie based on the older, Miller-inspired Batman he portrayed so effectively in Batman v Superman: Dawn of Justice.

Miller has been a long-time supporter of CBLDF’s fight for the First Amendment rights of the comics community, and we’re honored to be the beneficiary of the auction. Frank Miller originals rarely come up for auction or sale, so this is an exceptional chance to take home an original piece of Dark Knight art drawn by the man who redefined the character! The auction closes on May 26. To place your bid, visit the ComicLink website here.

← Crime Comics (Still) Illegal in Canada
Be a Comic Defender with CBLDF in Minneapolis This Weekend! →