Grand Rapids Public Library in Michigan celebrates working women this coming month with a series of discussions about notable female figures — including the maverick cartoonist Gertrude “Gert” Van Houten — who helped shape the political and editorial scene of the metropolitan area at the turn-of-the-century.

From the women of Berkey & Gay, who helped bolster the Grand Rapids economy during WWI, to Grace Ames Van Hoesen who was the first woman elected to the Kent County Commission, Gert, Grace and the Berkey & Gay Girls aims to spotlight the women who not only contributed to their local community, but helped open the doors for women across the nation to become active participants in arenas like editorial journalism or politics which hadn’t been open to them before.

The star of the discussions, though, is local celebrity cartoonist Gertrude “Gert” Van Houten, who is credited as the first female cartoonist to tackle local issues in comics form. Contributing cartoons to the Grand Rapids Press in the early 1900s, Gert touched on topics ranging from the suffrage movement in her community to the gossip of the day. “Gert had the pulse on a broad range of topics, beginning in the Jazz age,” writes Drew Damron who is leading the presentation about the cartoonist. “[These] included everything from ice skating on Reeds Lake, politics and gossip, what it was like to ride the streetcars, recent efforts at the local Red Cross, pranks at a luncheon, fashion trends, high society, and so much more.” 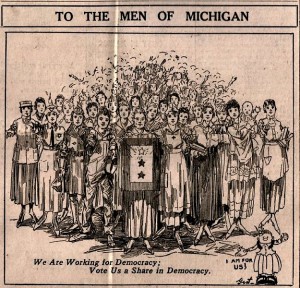 During a time when opportunities for women to contribute to the local press were limited, Gert overcame numerous obstacles and became one of the most prolific and popular cartoonists in Grand Rapids. Her work and mascot “Little Gert” would grace the front page of the Grand Rapids Press multiple times a week and would eventually garner national attention.

In 1918, she was sent to Washington D.C. to draw wartime cartoons, including a series of Liberty Loan cartoons. She would also be commissioned to design the John Ball memorial in John Ball Park, which still stands to this day. A contributor to the Chronicle, as well as the Interpreter, “Little Gert” would continue to amuse audiences well into the later part of the century.

From using her art to raise money for the war to a successful career in advertisement and fashion illustration, like many women at the turn-of-the-century, Gert broke down social barriers and helped cement herself in cartoon history as the first woman cartoonist, and go-to illustrator, to take on the issues of the day in her home town.

Interested in learning more about the women who have helped shape the comics medium? Check out CBLDF’s series on the women who changed free expression in comics (and upcoming book from Image Comics), She Changed Comics.