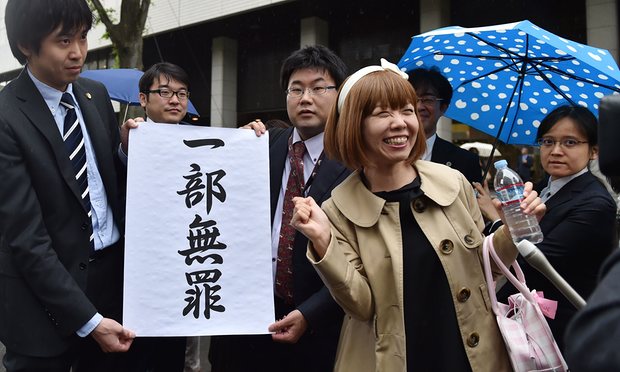 Igarashi and her lawyers display a sign reading “a part is not guilty.”
© Kazuhiro Nogi/AFP/Getty Images

A Japanese court yesterday imposed a fine of 400,000 yen (about $3,667) on artist Megumi Igarashi for distributing 3D plans of her own genitals via the Internet. The plans were among the premiums in her crowdfunding campaign, which raised money for her project to construct a full-size “vagina kayak.”

Igarashi, who works under the pseudonym Rokudenashiko or “good-for-nothing girl,” was acquitted on a separate obscenity charge for displaying small plaster models of her vagina in a Tokyo sex shop. Because the models were not for sale and were brightly painted such that they “did not obviously resemble female genitalia,” judge Mihoko Tanabe ruled that they were art and not obscene.

Igarashi was briefly jailed after she was charged last year, and she could have faced up to two years in prison on the distribution charge. She said yesterday that she was “20% happy” with the verdict since the figurines were ruled to be art, but that she will appeal the fine for transmitting the 3D plans. She is set to appear this weekend at the Toronto Comic Arts Festival for the English-language launch of her book What is Obscenity? The Story Of A Good For Nothing Artist And Her Pussy. Following that, she will travel to New York for a panel next Wednesday with graphic novelist MariNaomi at the Asian American Writers’ Workshop. CBLDF and several other organizations have sent letters of support urging authorities in the U.S. and Canada to allow Igarashi into both countries despite the obscenity charges.