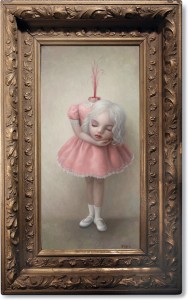 An art exhibit at the Virginia Museum of Contemporary Art turned controversial and sparked discussions of censorship this past week when a commissioner determined that some of the art in the exhibit was “offensive,” “obscene,” and “anti-Christian.”

Entitled Turn the Page: The First Ten Years of Hi-Fructose, the exhibit is being put on in collaboration with the popular contemporary art magazine Hi-Fructose and displays the artwork of more 50 artists using a variety of media. One of the artists whose art not only fulfills Hi-Fructose’s goal to spotlight pieces that “transcend genre and trend” but whose work has now incited controversy with a member of the Virginia Beach Arts and Humanities Commission is painter Mark Ryden. 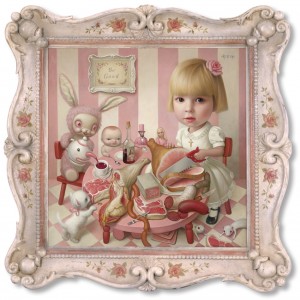 A self-professed “Pop Surrealist”, Ryden describes his colorful and painterly style as one that “blurs the traditional boundaries between high and low art.” His choice of often culturally loaded subjects, such as children, icons like Barbie and Bjork, and religion, is what has gotten him in hot water with commission member Ben Loyola.

Two of Ryden’s works — “Rosie’s Tea Party” and “Fountain” — are what flustered Loyola during a briefing on the exhibit this past week according to a report by WAVY-TV.

“Look at this, she’s got a saw in her hand cutting off a piece of ham with the words on the ham ‘Corpus Christi,’” said Loyola of “Rosie’s Tea Party” which depicts what initially appears to be an innocuous scene of a young girl dressed in a white dress enjoying afternoon tea with her stuffed animal friends and dolls, until you notice the numerous subtle cultural and religious references. “That is Latin for body of Christ, and the hand is dropping down and eaten by rats. This is very anti-Christian and anti-Catholic. I was shocked to see this.”

Calling into question the choices of including Ryden’s work in the exhibit, Loyola cites concerns over the fact that taxpayer money helps subsidize MOCA, which according to WAVY-TV accounts for 26% of his commission’s budget.

Although Loyola finds Ryden’s art to be offensive and expressed “horror” in recent interviews regarding the inclusion of the artist’s pieces in the exhibit, MOCA Executive Director Debi Gray doesn’t posses the same sentiments. Gray, who fully supports the selection of pieces for the exhibit notes that “art is intended to be controversial. Too some degree it’s intended to spark dialog, and I am delighted it has fulfilled our mission.” She added that, “Contemporary art is intended for dialog.”

Loyola doesn’t plan to just sit back and watch, though. “I’m responding to her false claim,” Loyola says of Gray’s comments. “Obviously she feels she can do what she wants with taxpayer money. Not on my watch.” Loyola has reached out to Attorney Collin Stone to have it confirmed whether the exhibit should be classified as obscene or pornographic.

In the meantime, though, the exhibit is still on schedule to open May 22 and run through December 31. In response to the controversy, Ryden describes what he thinks art— especially pieces that borrow from contemporary society and culture — is meant to do: “I am really not poking fun at religion. I am just looking at it in different ways.”