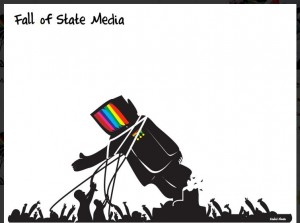 “A new golden age of cartoonists.” This is how Huffington Post contributor Merissa Khurma describes the explosive growth of artistic talent coming out of Middle East in a recent article. Empowered by the pen, Khurma writes how cartoonists like Sudanese artist Khalid Albaih and Egyptian indie comics creator Andeel are not only using their craft to discuss relevant social issues, but also demonstrating the importance of free expression.

The number of Middle Eastern cartoonists garnering international attention has grown. From Egyptian cartoonists like Doaa ElAdl and Anwar, who use their political cartoons to tackle difficult social issues like women’s rights and police corruption, to Jordanian cartoonist Osama Hajaj, who depicts not only domestic, but international events, “brave youthful artivists (activist artists) from the region are raising their voices through still illustrations,” writes Khurma. “They are witty and steadfastly unconstrained by editorial shackles.”

For these individuals, cartoons are in many ways the means for the international community to hear the voices of those who live and experience the turmoil on a daily basis. “Cartoons are approachable, breaking language barriers just like silent films; everybody understands Charlie Chaplain,” Khalid Albaih told Khurma.

Albaih has been very outspoken in the past few years about not succumbing to censorship and using his artwork to shape a new form of protest. Hajaj sees his work as a direct way to combat terrorism and provide a means for those impacted to be heard. “I fight terrorism and extremism in all its forms with my cartoons,” notes Hajaj. “I also try to capture the voices of the innocent and victims of political gamesenship,”

So what has sparked this seemingly overnight explosion of artistic talent in the region? According to Cairo-based fellow of the Institute of Current World Affair, Jonathan Guyer it was the Arab Spring. The events of 2011 “galvanized more artists” to step forward and speak out. For artists both established and emerging, the regional uprisings represented the prime opportunity to speak out about their experiences. As Albaih noted,

After the Arab Spring, everybody was positive and dying for free expression. Now with everything that’s happening, we are in transition, but also a lot of art is being produced. It’s a process and it’s happening and our job as intellectuals and artists is to help this change.

Whatever the motivation, these Middle Eastern cartoonists are ready inspire change. For Albaih, “cartoons allow us to start a conversation in a global public sphere and resuscitate a much needed dialogue.”

Here are some quick links to some of the coverage CBLDF has done on Middle Eastern cartoonists fighting for their right to free speech: