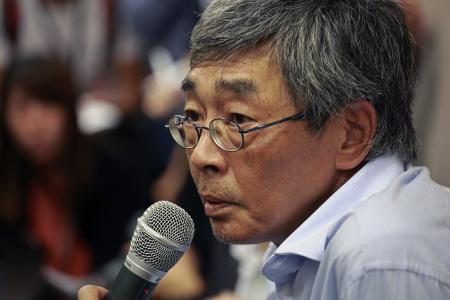 Four of the five Hong Kong booksellers who mysteriously disappeared late last year and were presumed to be in the custody of mainland Chinese authorities have returned to the semi-autonomous region, but only one is speaking openly what happened to them. Lam Wing Kee is speaking out about his eight-month ordeal, confirming that he was detained against his will and that interrogators were seeking information on mainland customers who have bought banned books from his shop.

Lam, whose name was also rendered in earlier media reports as Lin Rongji, was the manager of a Hong Kong bookstore owned by Mighty Current Press, which specializes in gossipy titles such as Overseas Mistresses of the Chinese Communist Party and Secrets of Wives of Chinese Communist Party Officials. In addition to Lam, four others associated with Mighty Current disappeared over a period of a few months last year: fellow store employee Cheung Jiping, the publisher’s co-owners Lu Bo and Gui Minhai, and editor Lee Bo. Many in Hong Kong saw the disappearances as an ominous breakdown in the “one country, two systems” policy to which China agreed in 1997 when the former British territory returned to Chinese control.

Lam was only allowed to return to Hong Kong now because he was supposed to retrieve a customer database from the bookstore and take it back to Chinese authorities. When he heard about the protests that have been held in Hong Kong since he and his colleagues disappeared, however, he decided instead to remain there and tell the truth. Unlike the other four men, Lam has no family members on the mainland who could be used as leverage by authorities. In a press conference last week, he said he realized that “if I myself, being the least vulnerable among the five booksellers, remained silent, Hong Kong would become hopeless.” Gui Minhai remains missing, but Cheung, Lu, and Lee resurfaced in Hong Kong in March and continue to distance themselves from Lam’s account.

At the press conference, Lam laid out the details of his detention. On a trip to visit his (now ex-) girlfriend last October, he says, he was arrested and blindfolded immediately upon crossing into the mainland city of Shenzhen. He was then taken to the city of Ningbo, where he was held in a small room and not allowed to contact a lawyer or his family. Often kept in solitary confinement and subject to repeated interrogations, he now says he would have committed suicide if he’d had the means to do so.

Lam is of course taking a huge risk by choosing to tell his story publicly. At the press conference last week, he told reporters from Hong Kong and abroad that “I thought about it for two nights before I decided tell you all what happened, as originally and completely as I could. I also want to tell the whole world. This isn’t about me, this isn’t about a bookstore, this is about everyone.” He says he has no plans to leave Hong Kong or seek asylum elsewhere, but knows that he certainly will never be able to return to mainland China again.

Gui Minhai’s daughter Angela, currently living in the UK for graduate school, also has no qualms about speaking out. Just after Lam’s release, she started a Twitter account to advocate for her father’s freedom as he is the last of the men still detained. In a press statement, she observed:

It is now beyond doubt that my father, like Mr Lam, was also abducted, forced to confess on television to crimes he has not committed, and to decline help from family and lawyers.

I hope that governments will now take their responsibilities seriously. China needs to address the illegal treatment of my father and his colleagues, and ensure my father’s safe return home. Sweden [where he is naturalized] needs to do everything it can to protect its citizen and his rights. The United Kingdom should do the same, as well as make every effort to make sure that the principle of One Country, Two Systems is being honoured.

The best hope for Gui’s release and the continued safety of his colleagues, particularly Lam, probably lies in international media attention as well as diplomatic pressure. To that end, the American Booksellers Association, the Association of American Publishers, and the American Library Association’s Office for Intellectual Freedom last week released a joint statement praising Lam’s bravery, urging the Hong Kong government to ensure the booksellers’ security, and demanding that Gui be freed from his unlawful detention.