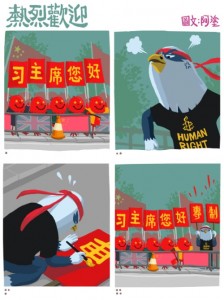 Cartoon by Ar To criticizing President Xi Jiping’s visit to the UK. Banner changes from “Hello President Xi” to “President Xi you are very dictatorial”

Hong Kong cartoonist Ar To is looking for a new publisher for his collection of political cartoons after his current publisher requested him to make changes to some of his more politically sensitive pieces.

Ar To is well-known for his cartoons depicting anthropomorphized animals often criticizing the Hong Kong government. From President Xi Jinping to relations between China and Hong Kong, To is not afraid to use his cartoons as a vehicle to speak out about social injustices in his home country.

His outspoken nature, though, is what has gotten him into hot water with the potential publisher of his collection of cartoons. According to Hong Kong Free Press, upon reviewing the book, the unnamed publisher requested that To edit some of his cartoons, citing concerns about the “sensitive” nature of the content. Not wanting to risk being sued, the publisher asked To to remove 10 of the cartoons — an act of censorship that had To going to Facebook and seeking a new avenue for publishing his book. “The political pressure has been stronger and stronger, the publishing industry is not in good shape, now it is even full of obstacles to just publish a book,” To said on Facebook. “Now the future [of the book] is in question, I don’t even know if my persistence was very stupid.”

To isn’t the first to run into publishing issues in the Hong Kong and China region. Earlier this year five Hong Kong booksellers went missing and were believed to be in Chinese custody. From history books to their own animation industry, censorship in region has become an increasing issue not only domestically but also in the eyes of the international community. Cartoonists like Rebel Pepper and Jing Yefei have faced exile and even imprisonment for speaking out about the Chinese government.

Despite the risks, though, To is determined to have his work published, and based on comments to his Facebook post, his fans and others stand by his right to free speech.

← South Africans Debate Legacy of Racist Imagery in Political Cartoon
Henning School Board Restores This One Summer to Library, with Restrictions →