An art display at the Batalion Bar and Museum in Prague is celebrating underground comic artist Kaja Saudek and tells the tale of his first-hand experiences with censorship in the 1960s and ultimate triumph over a Cold War communist government that heavily regulated free expression.

Kaja Saudek, called the “the king of Czech comics,” was an underground artist in the purest sense. Despite regulations imposed by the communist regime in the 1960s, which actively banned comics from the country and censored anything that remotely resembled political commentary or criticism of the government, Saudek found ways to produce and share his buxom beauties with a culture of young adults craving comics that deviated from the scrubbed clean and “intellectual” dregs being pumped out in the mainstream. Enamored by the works of Will Eisner and Robert Crumb, Saudek would illegally smuggle American comics across the borders of his home country and find alternative, underground channels for distributing his highly controversial art.

“He had many problems with his art due to censorship,” says tour guide Murin Wolf. “Saudek’s art was controversial. His comics featured busty women in tiny dresses, provocative poses and sexual and violent scenes” — all things that the Czech government explicitly forbid and took legal action against when produced. Though Saudek’s work rarely tackled political subject matter, the artist had his fair share of run-ins with the government, at one point landing himself in jail for producing a comic featuring orange skinned aliens ruled by an oppressive government. 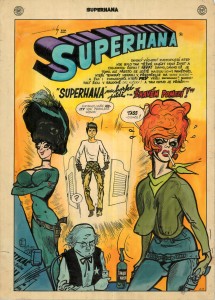 As much as Saudek was creating his comics for himself, though, he was also producing his work for young adults like himself that wanted something more than the books the Czech government promoted as “intellectual” and appropriate. “This emerging adult interest in comics occurred at an unfortunate time, as Nazism arose and any vaguely political cartoon strips were banned during World War II,” notes comics researcher Pavel Korinek. “The censorship continued after the war when the Communists ruled the country and deemed comics un-intellectual and worthless as an art medium.”

Much like in American comics history, Saudek and other comic artists developed an underground comics scene that actively fought against the regulations imposed upon mainstream publication by producing comics that explicitly challenged those rule. Like Robert Crumb, who helped form the 1960s underground comix movement that arose in the United States in the aftermath of the Senate Subcommittee Hearings of 1954 and establishment of the Comics Code Authority, Saudek would become the leader of a comics movement that was dedicated to producing the kinds of comics young adults wanted to read in the Czech Republic.

To this day, Saudek remains one of the most important and influential artists in the history of the Czech Republic, not only for the work that he produced, but for the work that he accomplished standing up for free expression despite the obstacles and hostilities he faced from the Czech communist government.

← Organizations Urge U.N. To Take Action Against Free Speech Violations in Turkey
Japanese Artist Rokudenashiko: “My Body is Not an Obscenity” →