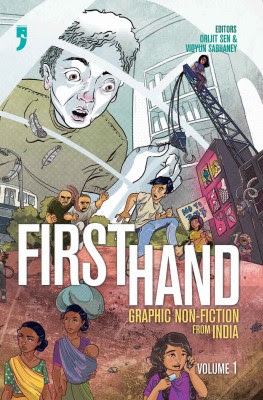 Indian graphic novelist Orijit Sen first came to our attention late last year, when his illustration “The Punjaban” was repeatedly removed from Facebook because it showed a partially nude woman, despite the social media giant’s claim that it allows artistic nudes. Sen and his followers launched an impromptu protest, posting their own favorite nudes from art history until Facebook finally admitted “The Punjaban” had been taken down in error. But well before that incident, Sen was and continues to be a vocal advocate for artistic freedom and the graphic novel format both within India and worldwide.

For his most recent project, Sen co-edited a collection of graphic nonfiction–the first of its kind in India–called First Hand. The 22 contributors to the crowdfunded volume cover topics from sectarian strife to sex trafficking, hoping to spark new conversations about difficult issues. The first printing of the book already sold out, and a review at the website CatchNews said that the final story about the early life of revered singer Begum Akhtar “establishes the future of the graphic novel in India.”

Sen also recently had the chance to see and participate in artistic creation in Palestine through a three-week cultural exchange program organized by two amateur theatre companies–one in New Delhi and one in a Palestinian refugee camp. In the course of creating three public art pieces, he observed that art seemed to fulfill a different role there than it might elsewhere:

Unlike in many apparently peaceful countries, where art hovers on the edges, performing mostly as a distraction for the wealthy, art in Palestine is often out in the streets, highly politically charged and constantly challenging and inspirational.

Back home in India, he is keeping that vitality and immediacy in mind, even though some extremists there would prefer that art and other forms of expression remain “safe” and non-confrontational–and will often resort to threats and violence to get their way. The chilling effect created by this atmosphere of intolerance is a much bigger problem than direct censorship, Sen believes:

Additionally, just like in Malaysia where the British Colonial-era Sedition Act remains in force and has been used against hundreds of dissidents including cartoonist Zunar and graphic designer Fahmi Reza, government censorship in India is facilitated by laws that were originally implemented under the colonial monarchy rather than the modern democracy. Sen says it’s well past time for those laws to be abolished:

There are also some laws like the sedition law, which are there from British times. It is quite ironic that these laws were brought up by British to use against us and we are using them, even after 70 years of independence, against our own people. Also when you censor anything it gives an idea that people cannot be trusted. Censorship in all its forms is dangerous to society.