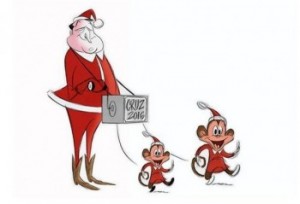 Pulitzer Prize-winning cartoonist Ann Telnaes is no stranger to the violent and sometimes highly personal backlash and criticism her works incite. In a recent editorial piece for the Columbia Journal Review, Telnaes discusses how social media has become a tool of intimidation and the potential harbinger of self-censorship, fundamentally changing the landscape of editorial cartooning and the ways in which audiences receive and talk about editorial cartoons.

Last year, Telnaes came under public and personal attack for a cartoon she produced for The Washington Post, which depicted then Republican presidential contender Ted Cruz as an organ grinder with his two daughters in monkey suits dancing to the tune of his 2016 presidency campaign. The cartoon drew immense controversy and incited a heated debate online between those who stood in support of Telnaes and her right to free speech and those who urged her to kill herself. “I stood frozen in front of my computer, watching my Twitter feed roll like a slot machine reel,” recalls Telnaes.

Despite the four days of rolling death threats and calls for explicit violence to be enacted against her person, Telnaes admits that in this day and age, cartoonists are a “thick-skinned group” and “used to getting negative feedback from irate readers telling us we’re idiots and how terrible our cartoons are.”

In the last decade, access to and activity on social media platforms have skyrocketed. Although many, like Indian cartoonists Kanika Mishra and Orijit Sen, see platforms like Facebook and Twitter as vehicles for free speech and mechanisms to share their works about particular social issues with the broader global community, as Telnaes points out, social media has also increased audiences’ ability to respond to and criticize cartoons  in real time, often without any form of filter. “Although passionate criticism over a provocative cartoon isn’t new,” writes Telnaes, “the introduction of social media into politics and election campaigning has dramatically increased the speed and intensity of those reactions, and the repercussions for the editorial cartooning profession.”

The problem isn’t that people can talk about cartoons in real-time. Telnaes embraces and celebrates the fact that now more than ever free speech is truly free flowing. The problem is that audiences, and subsequently the media that reports on those audiences’ reactions, often miss specific satirical nuances — and sometimes the point of the cartoon entirely — and the media engages in a mad-dash to bump click-rates and gain subscribers with salacious headlines.

Moreover, in light of increasing use of social media to attack and intimidate and the media’s subsequent fixation the negative coverage, editorial departments are taking notice and, whether intentionally or not, reacting to that violence and negative coverage with censorship. Telnaes cartoon was ultimately pulled from The Washington Post site due to the negative reaction it garnered from the press. “The big worry for editorial cartoonists these past several years has been the widespread loss of staff jobs as newspapers fold or choose to eliminate their cartoonist in favor of buying syndicated cartoons,” said Telneas, adding:

But the much bigger danger now is the use of social media to intimidate and silence, because it attacks the satirical core of what makes a cartoon an editorial cartoon. If we’re being harassed and pressured not to aim our pens critically, we won’t be able to call ourselves editorial cartoonists much longer — we won’t be able to create anything but mushy, uncontroversial drawings.

Cartoonists are well aware of the ways in which social media can impact their work, but it boils down to educating the public who read the cartoons not succumb to saucy click-bait propagated by the media. Satire has a long and rich history in the United States and around the world, and it is important to look beyond the superficial readings of cartoons and at the deeper metaphors and messages being implemented through imagery. “We might be wearing the metaphorical funny hat, but we take our jobs as journalists very seriously,” concludes Telnaes.

It has been said cartoonists are on the front lines of the war to defend free speech. Don’t make the job easier for the social media lynch mobs by ignoring the threat their attacks pose to that freedom.