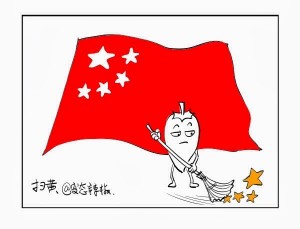 For over a year, Chinese cartoonist Wang Liming (best known as Rebel Pepper) has been living in exile in Japan after landing in hot water with the Chinese government for his subversive and highly controversial cartoons. In a recent interview with Index on Censorship, the artist talks about censorship in his home country and how he uses his art to speak out about social injustices when others are frightened into silence.

“People who live in totalitarian countries experience educational brainwashing and real fear of the government,” says Rebel Pepper about China and the government’s increasing use of intimidation and legal repercussions to scare citizens and cartoonists into not critiquing the current state of affairs in the country. “They are not brave enough to stand out and express different opinions.”

From the shut down of personal social media sites to deportation and jail time, China has become a hostile environment for cartoonists. Despite death threats and silencing tactics, though, cartoonists like Rebel Pepper see their work as necessary in combating the increasing threat to free speech and rise in self-censorship within the country. Although, Rebel Pepper admits that early in his cartooning career he felt compelled to resort to forms of self-censorship in order to prevent his work and sites from being banned, with the growing support both within and outside China, he has become more empowered to explore his “creative freedom.”

Cartoons aren’t all about uncovering the ugly truths, though. As exemplified by his cartoon pepper character, for Rebel Pepper cartoons also represent a vehicle through which people can laugh at a situation and attempt to alleviate the fear imposed by the government. “They directly point out the truth, expose a dictator’s lies and make people laugh at it,” notes Rebel Pepper. “In China, censorship online is very strict, protesters’ articles are always deleted, but cartoons are easier to spread and so can be very popular.”

That popularity is what keeps the artist from continuing to do his work despite currently living in exile in Japan where he faces isolation and a precarious financial situation. “I’m still insecure,” admits the artist, adding:

In China most people, including my parents, cannot understand my choice and the way I live. After experiencing several political movements under the CCP, they fear politics. They think normal people shouldn’t touch these topics. They should just earn money and take care of themselves and their family. There are only a few people who can understand and support what I feel and do.

Through the efforts of cartoonists like Rebel Pepper, though, the world’s eyes are turned towards countries like China and through support of efforts like his there is hope that things can change.

To read the full interview with Rebel Pepper, click here.