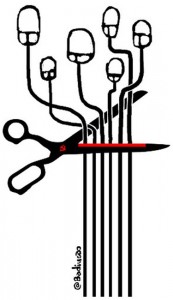 Chinese cartoonist Badiucao has no qualms about tackling China’s difficult political and social issues. As a result, he’s become skilled at eluding the authorities that would censor him.

In a recent interview with Cartoonists Rights Network International, Badiucao speaks about the lengths he goes to in order to protect his identity and safety in a country well-known for censoring criticism and threatening the families of those who voice opposition. Badiucao first addresses his choice of nom de plume, citing that “a random name” makes it more difficult for authorities to even identify him, and he lives in genuine fear that his government might harm him.

When asked about the risk posed to family members of dissident voices, Badiucao tells CRNI:

Yes, repercussions for family and friends is the most common way for the Chinese Government to throw terror on people like me. They stop your family from going overseas, even children of dissidents — for example, human rights lawyer Wang Yu’s son. They frame family members and send them to prison in order to bend the will of dissident or purely as a punishment: Three-Year Prison Term for Nephew of Chinese Dissident Chen Guangcheng.

Badiucao himself lives in exile in Australia and relies on Twitter as a platform for expressing his dissent (he can no longer post on China’s Twitter analog, Weibo). But he also points out that no one is safe, even cartoonists living in exile, bringing up the case of two Chinese dissidents who were deported from Thailand. Upon their return to China, the dissidents, which include political cartoonist Jiang Yefei, were imprisoned.

Badiucao speaks about the reasons he moved to Australia:

The biggest motivation for me to leave China was to seek freedom and be free from the political persecution. My grandpa was in the art industry in China. And both of my grandparents got killed in the political catastrophe in 1957 for creating “wrong art,” leaving my father an orphan when he was just a toddler. Hence, I knew if I wanted to make art freely without the fear of the government, I had to leave.

Despite not living in China, Badiucao is able to reach an audience through Twitter and China Digital Times, an independent web-based newssource dedicated to providing uncensored news about China. Badiucao acknowledges that he reaches a limited — but very enthusiastic — audience via Twitter. That audience may become smaller if Chinese authorities succeed in “purifying” the internet, by Badiucao has some hope it may turn out otherwise, telling CRNI:

There is a Chinese saying: “Money can even make a ghost turn a grindstone for you.” That is pretty much the case here. A lot of social media companies want to have a share of juicy Chinese market. But the only way to enter China is to cooperate with the censorship system and even become a part of the brainwash and propaganda machine itself. However, with the weakened economy in China, I hope it will change!