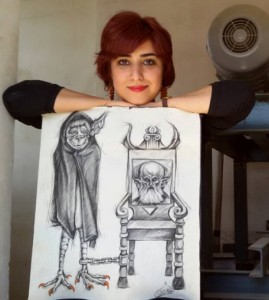 In light of the fact that she recently spent 18 months in prison for drawing a caricature of the Iranian Parliament, Atena Farghadani could be forgiven for taking a bit of a professional break to savor her newfound freedom. Instead, she was back on Facebook earlier this month with a new cartoon taking aim at the state-run women’s university that expelled her after she was arrested.

The president of Alzahra University, where Farghadani was studying art, is Ensieh Khazali — the daughter of a hardline ayatollah who died last year. In the new caricature, Farghadani depicts Khazali as a Yoda-like gremlin with bird feet chained to a throne bearing her father’s likeness, suggesting that the university is constrained by the most repressive elements of Iran’s theocracy.

Farghadani was first arrested in August 2014 for her cartoon mocking members of Parliament as they debated a bill to ban voluntary sterilization procedures, such as vasectomies and tubal ligations, in an effort to reverse Iran’s falling birthrate. But even before her arrest, she was already well-known to the government for her fearless advocacy on behalf of political prisoners, Baha’i minorities, and the families of protesters killed after the country’s presidential election in 2009.

When Farghadani was released on bail while awaiting trial, she promptly uploaded a video to YouTube detailing abuses she suffered in prison including beatings, strip searches, and non-stop interrogations. She was rearrested in January 2015 and finally received the draconian sentence of 12 years and 9 months after a perfunctory jury-less trial in late May. Last year, she was honored with the 2015 Courage in Editorial Cartooning Award from CRNI. She was finally released this year after some charges were dismissed on appeal and the rest of her sentence was reduced to 18 months, which she had already served.

Mere minutes after her release last month, Farghadani sent a short video to the activist Facebook page My Stealthy Freedom, where Iranian women post pictures of themselves without hijab. Here is her brief but powerful message, according to the English subtitles on the video:

Farghadani’s fearless advocacy for human rights and freedom of expression is a continuing source of inspiration!