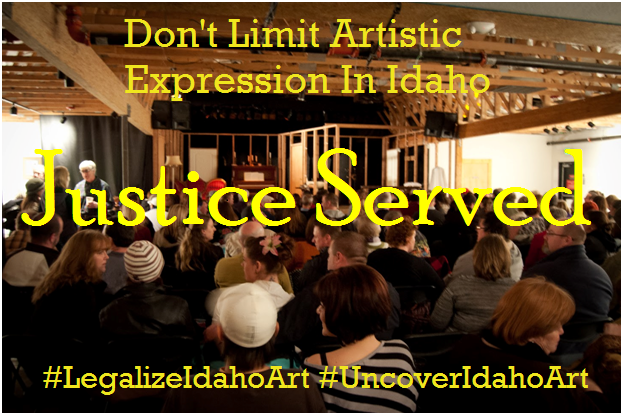 Facing an ACLU lawsuit, the state of Idaho quickly conceded this week that its antiquated law banning “sexually suggestive art” in establishments that serve alcohol is unconstitutional. The law will no longer be enforced in spaces that “typically host performances expressing matters of serious literary, artistic, scientific or political value,” and the Visual Arts Center in Garden City will be reimbursed for the fine it paid after a burlesque performance there earlier this year.

The VAC holds a liquor license to serve beer, wine, and mixed drinks at its events. Although there was no complete nudity in the show by burlesque artist Anne McDonald and others, two undercover officers from the state police were in attendance and later filed a complaint via the Bureau of Alcohol Beverage Control, alleging that “the employees of the Visual Arts Collective did nothing to prevent the exposure, to viewing by others, of the portion of some of the female performers’ breasts below the top of the areola, or the cleft of their buttock in violation of Idaho Code § 23 – 614(a).” One of the officers also bought and consumed a mixed drink and a beer at the event.

To avoid a permanent withdrawal of its liquor license which brings in a significant portion of the operating costs for the small arts and performance space, the VAC agreed instead to a 20-day suspension and $8000 fine. McDonald, the VAC, and the Alley Repertory Theater, which also puts on plays in the venue, then filed the lawsuit on First Amendment grounds. The theater company was concerned that it might be required to censor its upcoming play The Totalitarians in accordance with the law.

Less than two weeks after the lawsuit was filed, the state agreed to a settlement on Wednesday which will return the $8000 fine to the VAC, expunge its record of the liquor license violation, and most importantly allow artistic performances around the state to be presented without censorship. Deborah Ferguson, part of the legal team behind the lawsuit, expressed gratitude for the quick resolution:

The state chose to settle the case because the forty year old statute is significantly flawed and violated clear constitutional rights of these artists and venues. We appreciate the State’s decision not to engage in protracted litigation, but instead to change course, and end these undercover operations.

An event at the VAC last night that had been scheduled prior to the settlement as “an evening of discussion, activism, and solidarity” around the case instead turned into a victory celebration. McDonald also expressed relief that she will now be able to perform without worrying that she is endangering a venue’s livelihood:

While I still hope for a day that the gender of an unclothed breast is insignificant, I am pleased that we have come this far so quickly and artistic expression is more open to the artists’ discretion. I am thrilled the state has taken this matter seriously. I am utterly relieved that I no longer have to censor my work according to archaic, vague laws. I am so grateful to our legal team, their commitment to the first amendment and equal rights, and their tireless work on this matter. I know that artists, specifically burlesque performers, around the state will be overjoyed.

For now, the ACLU legal team has chosen to keep the lawsuit open just in case the state legislature attempts to modify and revive the unconstitutional law when it convenes next year. If the legislature takes no action, the suit will be closed at the end of the session. Congrats to the artists and free speech advocates of Idaho!

← CBLDF is Back From SPX With New Signed Books!
Diverse Comics for Classrooms and Libraries: Gender →