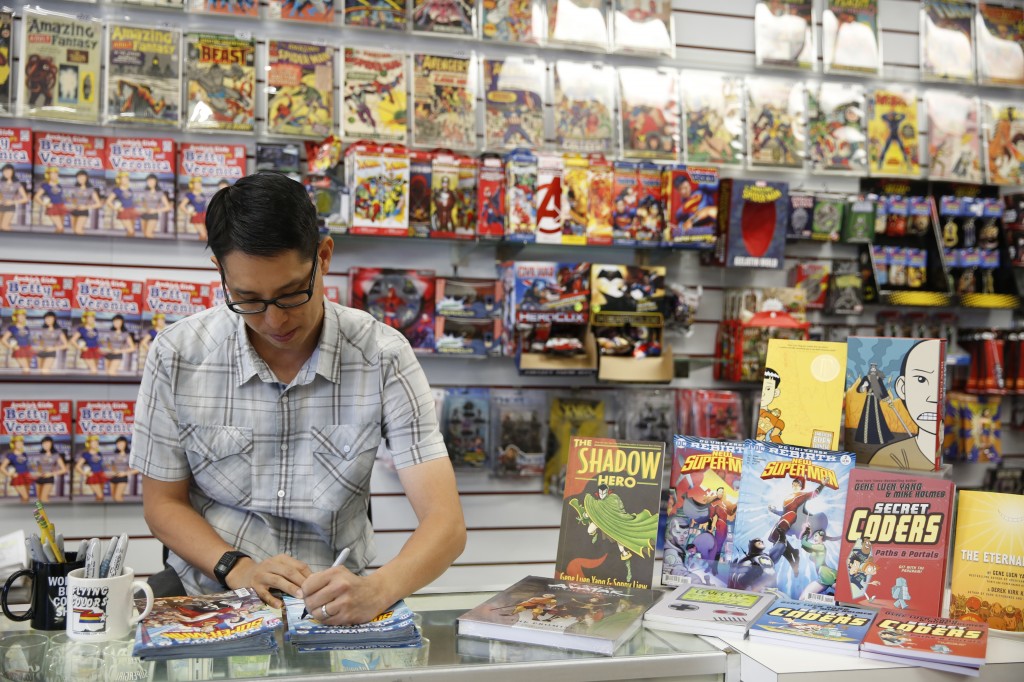 In the midst of his two-year term as National Ambassador for Young People’s Literature, American Born Chinese creator Gene Luen Yang got another major honor this week: a MacArthur Fellowship, more commonly known as the “genius award.” The five-year, $625,000 no-strings-attached grant is given to individuals across a variety of fields who show “exceptional creativity, promise for important future advances based on a track record of significant accomplishment, and potential for the fellowship to facilitate subsequent creative work.”

Yang and Lauren Redniss, who works in nonfiction multimedia, are only the third and fourth sequential artists to receive Macarthur Fellowships in the 35-year history of the program, following Alison Bechdel in 2014 and Ben Katchor in 2000. Both Yang and Redniss have also been National Book Award finalists: Yang for both American Born Chinese and Boxers & Saints, and Redniss for Radioactive: Marie & Pierre Curie: A Tale of Love and Fallout. In addition, American Born Chinese was the first graphic novel to win the American Library Association’s Printz Award for young adult literature.

In an interview with the Los Angeles Times–from a Panera Bread location, because he doesn’t have a dedicated writing space at home–Yang says the grant will go towards what he sees as his three primary and interwoven roles: a family member, a cartoonist, and a teacher. To that end, he plans to use some of the money to send his two oldest children to college, and another portion to hire an intern possibly from Vermont’s Center for Cartoon Studies. In addition to gaining an assistant for his work, he intends for the paid internship to serve as “a way of easing somebody into the comic book industry.”

Yang already has been fulfilling the teacher role for over 15 years: he taught high school computer science in Oakland, California from 1998 to 2015, and his new comic series Secret Coders “cleverly introduces computer coding within an engaging mystery plot,” according to the MacArthur Foundation. The new infusion of funding will allow him to run with some pedagogical ideas he’d been brainstorming with the Library of Congress as National Ambassador for Young People’s Literature, “but we weren’t sure where the resources to do those things would come from — and now I have access to resources.”

Huge congrats to both Yang and Redniss for this much-deserved honor! And an extra round of applause to the MacArthur Foundation for increasingly recognizing the unique value of sequential art. Read up on all of the 2016 MacArthur Fellows here.