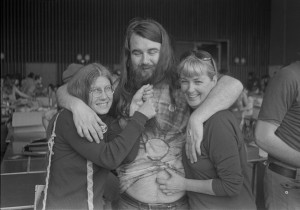 Comics legend Lyn Chevli has passed away. Co-founder of Nanny Goat Productions, along with legend in her own right Joyce Farmer, Chevli is credited as the co-publisher of some of the most important feminist works of the underground comix era. She passed away on October 8 of age-related causes in Laguna Beach, California. She was 84 years old.

Intrigued by the underground comix being produced by men in a post-code industry, Chevli decided to take the dive into the world of comix by creating books for women by women. She sold her popular independent bookstore Fahrenheit 451 and partnered with Farmer to pursue comix. “Lyn became disturbed by the clever but bizarre and androcentric stories in the early undergrounds, especially Zap Comix, and decided to produce a feminist comic book that would match the Zaps in anarchic content, but from a woman’s point of view,” writes Farmer in her remembrance of Chevli for The Comics Journal.

In 1972, Nanny Goat Productions’ Tits & Clits went on sale just a few weeks before the seminal Wimmen’s Comix anthology. Selling out of its 20,000 unit print run, Chevli and Farmer proved that there was not only a market for a different kind of comic that spoke to women, but also that comics could bring value to their burgeoning community.

In her remembrance, Farmer writes about the ways in which her and Chevli’s work inspired other women:

Roberta Gregory, creator of Bitchy Bitch, has said that we “gave women’s liberation’s second wave a very badly needed dose of sass. The spirit of their comics was uniquely unlike any other aspect of the literature, and even other women’s comics of the era. They were my mentors, encouraging me to publish my own comics.” 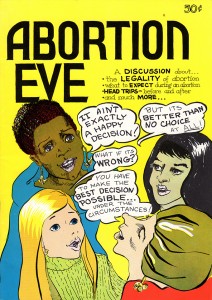 In 1973, Chevli and Farmer would push the proverbial envelope further and produce Abortion Eve, an educational comic that tackled the controversial subject of women’s reproductive rights. Inspired by the landmark Supreme Court decision in Roe v. Wade, which guaranteed a woman’s right to abortion, Farmer notes that she and Chevli wanted to make an “educational comic explaining the emotional stress an unwanted pregnancy causes in women, the medical aspects of an abortion, and the steps one must follow to end a pregnancy safely.”

Although Chevli and Farmer’s work was celebrated within the comics and feminist communities, to outsiders, they were peddlers of smut who endangered America’s youth by publishing materials that many labelled obscene.

In an interview with Viva Magazine, Chevli said that to others Tits & Clits “has been described as pornography and perhaps it is, but we prefer to think of it as an iconoclastic look at female sexuality.” Moreover, in a separate letter from 1972, Chevli wrote, “I… suspect that it blows a few minds when readers discover that Joyce and I are 33 and 40 years old, the mothers of teen aged kids, pillars of society, attractive, charming, and heterosexual. We are also responsible citizens and produced this disgusting work from a sense of frustration and a deep philosophical base.”

On December 4, 1973, Joyce Farmer walked into Chevli’s former bookstore, Farenheit 451, to deliver copies of Nanny Goat Productions’ Pandora’s Box Comix. Instead, she was told by the owners that they would no longer be able to carry Farmer and Chevli’s undergrounds because the owners had been arrested for carrying other comix that the Orange County prosecutor deemed obscene.

Although it wasn’t Chevli and Farmer’s books that had landed the store in hot water, the women behind Nanny Goat Productions realized that authorities in Orange County might soon be knocking on their door. Chevli and Farmer packed up Nanny Goat Productions in the dead of night and hid their comix in friend’s closets and garages across Orange County, eventually moving their materials to Los Angeles as the court case stretched out over two years before it was ultimately dismissed.

Lyn Chevli is one of the women who changed free expression in comics. She is remembered for not only revolutionizing comics for women, but also recognizing the importance that they can have in educating and changing people’s perspectives on issues like women’s rights. As Farmer writes, “Lyn Chevli lived a long life and had a host of creative, intelligent friends. We will miss her imaginative and always exuberant adventures.”

To read Farmer’s full remembrance, click here. To learn more about Lyn Chevli and her work in comics, check out the following CBLDF articles: