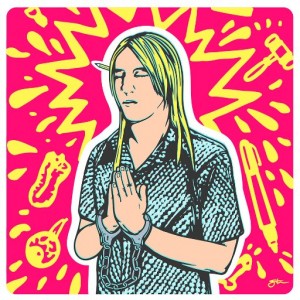 A guest post from Mike Hunchback, producer of The Trial of Mike Diana

Both sides of the trial are examined through interviews with the case’s prosecutors Stuart Baggish and Chris Marrone and defense attorney Luke Lirot. Among the comic book creators we’ve interviewed are Neil Gaiman, Jay Lynch, Peter Bagge, Stephen Bissette, Peter Kuper, and Scott Cunningham. Our production team even tracked down protestors from both sides to tell their stories as well. It is our great hope that The Trial of Mike Diana will inspire its audience to value their own right to free speech — as well as their enemies’.

It seems impossible today that someone Xeroxing a fanzine for minor mailorder distribution could end up in handcuffs, and that’s one of our main reasons for making this film. It’s too easy to forget that these things occur, and that our laziness increases the chances that it will happen again. When an obscenity case like Mike’s does happen, it’s always aimed at the easiest targets — the independents, those without money or resources to fight, and reeking of the impression that they’re being made an example of.

I strongly feel that each of Mike Diana’s various pieces of artwork over the years is part of one continuously growing piece, a sort of ongoing commentary by-way-of regurgitation on everything that Americans both outwardly fear and subconsciously indulge in. Mike’s work comes off as a profoundly satiric suggestion that everything the Satanic panic phenomenon warned us about was true. And frankly, that both scares people as well as goes over their heads.

While comic books have become a more and more respectable medium in the public eye, it’s also true that conversations about limitations on free speech have risen at an alarming rate. Ages ago, Evelyn Beatrice Hall summed up the philosophy for free speech in its purest form in The Friends of Voltaire: “I disapprove of what you say, but I will defend to the death your right to say it.”  Seemingly long forgotten, now in an age in which many Americans live exclusively in their own comfort zones and react with blind rage whenever a window to another view is opened — it is this potential for illogical reactionary madness that is at the heart of Mike Diana’s comics. It is also at the heart of why his was convicted of obscenity charges in 1996 for his self-published Boiled Angel. 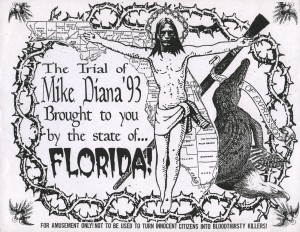 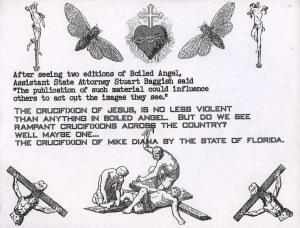 Perhaps it’s best put by First Amendment lawyer Luke Lirot, Mike Diana’s defense attorney for his obscenity trial. When I asked him “What about when people drudge up that old metaphor, that ‘Free speech is important but you still can’t yell FIRE in a crowded theatre’?”  Without a moment’s hesitation Lirot chimed in: “Yes you can! If you’re on the stage!”

Directed by cult filmmaker Frank Henenlotter and funded in part by a Kickstarter campaign, The Trial of Mike Diana will explore the often subjective standards of obscenity and the intense backlash that can result from what are after all “only lines on paper.” To donate to the film, visit the fundraising page on Kickstarter here.

← Bookstore Threatened for Anti-Trump Display
Be a Force for Change! Support CBLDF! →