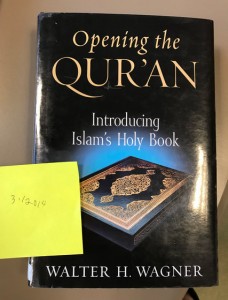 One of seven books recently defaced in Evanston Public Library.

Following a troubling rise in hate crimes and ideologically motivated book defacement in libraries, the American Library Association’s Office for Intellectual Freedom announced recently that it has begun formally tracking such incidents. OIF is the office that normally tracks challenges and bans of library materials across the country.

The new initiative was spurred in part by the defacement of seven books about Islam and the Koran in the collection of the Evanston (Illinois) Public Library. While gathering books in that subject area for an upcoming program presented in conjunction with Northwestern University’s Middle East and North African Studies department, a librarian discovered that someone had scrawled swastikas inside the covers along with messages such as “hatred cover to cover.”

While it’s not unusual for library staff to come across vigilante “edits” or commentary in returned books, this sort of systematic targeting across a whole subject area is much rarer. The damaged books have not been checked out all at once or by the same person, suggesting that the vandal probably defaced them inside the building without taking them home. EPL has some security cameras, but not in every row of shelving. No suspects have been identified, but the library filed a police report and issued a statement assuring that “those who are caught defacing library materials will be prosecuted to the full extent of the law.”

Other recent incidents identified by OIF were at the University of New Mexico’s library, where a Muslim student escaped an attempt to remove her hijab by force, and Reed College in Portland, where more swastikas and “hateful, threatening messages” were found on interior walls of the library. Outside the U.S., a Toronto library branch was one of several buildings in that city recently defaced with swastikas. In the week since those incidents were reported in a New York Times article, a Kansas City Public Library patron drew yet more swastikas in multiple locations throughout the system’s central branch. The man was caught on surveillance video and library staff notified police.

OIF’s goal in tracking these incidents, says director James LaRue “stay on top of it, develop training or webinars [for library staff], and support our members.” Equal access and security for all law-abiding community members is after all a crucial component of intellectual freedom in libraries, as demonstrated by Darby, Montana, library director Wendy Campbell, who won this year’s Robert B. Downs Intellectual Freedom Award for successfully hosting a program on Islam despite protests from a few locals. Perhaps now more than ever before, libraries hold the key to foster lifelong learning and respectful community discourse, countering a toxic cycle of fear and ignorance.