Every year, the BBC puts the spotlight on influential women around the world for its 100 Women series. For 2016, the list includes three Middle Eastern cartoonists fighting for women’s rights and freedom of expression: Doaa Eladl in Egypt, Riham Elhour in Morocco, and Nadia Khiari in Tunisia.

A few years ago, we reported on Doaa Eladl as she continued to use cartoons to shed light and open conversation about the controversial practice of female genital mutilation (FGM) in the wake of targeted persecution online and even allegations of blasphemy. Eladl remains optimistic in the face of challenges and remains determined to fight against issues such as sexual harassment and religious fundamentalism through political cartooning, even if it is not easy:

Here, a self-portrait of Eladl shows the cartoonist as an equal among her male counterparts in the field:

Riham Elhour is also quite familiar with being a lone female in the male-dominated field of cartooning. In fact, Elhour was the first female cartoonist published in the Moroccan press and continues to be the only female cartoonist at her newspaper.

Elhour uses caricatures to help fight for women’s rights. “Stereotypes about women’s roles are slowly fading away,” Elhour says. “Art and caricature can be powerful tools for that.”

This cartoon from Elhour draws attention to a persisting male guardianship law which requires that women have their husband’s permission to travel abroad if they want to take their children with them: 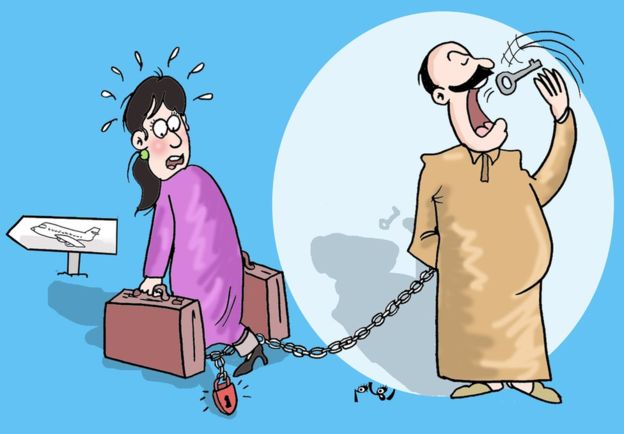 “I want my drawings to stir women to fight for their rights,” Elhour says. “I don’t want them to moan about being the victim. I am a fighter. All women are fighters.”

In Tunisia, Nadia Khiari, creator of Willis from Tunis, uses her cartoons to speak up about issues affecting women in her country such as cultural attitudes and sexual violence.

Willis is a cat character through which Khiari comments on domestic and world affairs. Khiari first created the character after a period of transition in her country marked the end of censorship in Tunisia. Earlier this year, Khiari accepted the first annual “Couilles au Cul” award for artistic courage from Festival OFF for her satirical drawings.

For the 100 Women season, Khiari illustrated Willis in a chilling scene in which a family rejoices in the preservation of their honor after learning that their daughter’s rapist wants to marry her. Khiari explains, “The body of a woman belongs to her family and even if she has been subjected to sexual violence, it is the honour of the family that must be preserved above everything.” The cartoon was inspired by a public debate over a Tunisian talk show host who was suspended from his job in October “after suggesting that a young girl who had been subject to years of sexual abuse by three male relatives should marry one of them when she became pregnant.”

Like Elhour, Khiari also recognizes the power of cartoons in the fight for freedom of speech:

Cartoons are communicative tools. Their strength lies within their direct and quick impact. We live in a disposable society, so it’s important to use images in a smart way. Exposing the absurdity of certain politicians is also a way to fight. 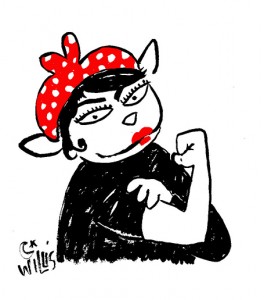 Khiari does not take this newfound freedom for granted, and uses it to encourage others in Tunisia to speak out too:

Freedom of speech is one of the only concrete victories of that revolution. We have been killed for decades. While we can speak and despite the attempts of silencing us, I exercise this fundamental right that has been earned at the price of many sufferings and human lives, in Tunisia or elsewhere. If we give up to fear, we’re lost.

Read the whole article about the BBC’s selection of these three amazing North African women here. See who else was selected by BBC for this year’s 100 Women series here.