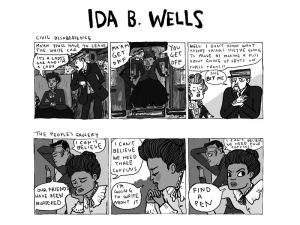 For decades, syndicated press was virtually the only means for cartoonists to have their works published and build their readership. With a combined rise in social and political limitations, though, the internet and web comics grew to be the champion of cartoonists in a world where free speech is challenged everyday.

A recently reposted article by The Economist describes how this came about. Opening with the story of how Bill Watterson, the creator behind the beloved cartoon Calvin and Hobbes, abruptly ended his popular strip out of disdain for the “cheap” and “brainless commodity” syndicated comics had become in the last century, The Economist articulates the rise and fall of printed comics press. From the days of yellow journalism and the infamous Yellow Kid strip to immensely popular satire magazines, cartoons celebrated a decades-long heyday in mainstream newspapers and magazines until something happened in the late 1980s and early 1990s.

Throughout the early part of the 20th century, cartoonists were able to find their voice through the comic pages provided by the Sunday World, New York Times, and Punch magazine. But the world of printed press was changing, especially in the 1950s during the uproar over comic books and the implementation of the Comics Code. Whether it be content limitations imposed by the publishers on creators or outright censorships, printed cartoons and comics weren’t quite what they used to be. As the century wore on, classic strips like Watterson’s Calvin and Hobbes were ending and some original creators were passing down the mantle to new artists.

In the background, though, the internet was gaining traction, and a whole new generation of cartoonist and comics creator was coming into its own. For them, the internet was a literal blank slate, where they could find their voice and wouldn’t be constrained by the editorial eye of a publisher. As long as they were willing to make the content and promote themselves through web channels like social media, there were little to no limitations on what they could do. “On the internet, anything can thrive,” writes The Economist.

From the highly intelligent humor strips by Kate Beaton, to wholly innovative sites like The Oatmeal and XKCD, the internet has become the cartoonists dream-playground.

The internet hasn’t just become a vehicle for free speech in the English-speaking world. Cartoonists around the world — especially in countries where expressing oneself freely can have legal or physcial repercussions — are finding their voice on the internet. Sudanese cartoonist Khalid Albaih has built a following online publishing comics that address serious global issues. Chinese cartoonist Badiucao may have left his home country, but uses Twitter and the independent web newssource China Digital Times to reach his audience and sidestep censors. Kanika Mishra, a female cartoonist out of India who has been threatened for her work, describes how social media has enabled her to not only find new audiences, but empower her to continue to spread her cartoons which discuss social injustices in her home country.

As The Economist aptly notes, the internet has “unleashed a burst of cartooning creativity” on a truly global scale never before seen. Where there was once silence due to monetary, political, or physical limitations, the internet has opened the door for anyone to freely express themselves. Moreover, “Web cartoons have an important political role where speech is constrained.”

← After Uptick, ALA Office Now Tracking Hate Crimes in Libraries
2016 Wasn’t All Bad: It Had Comics! →