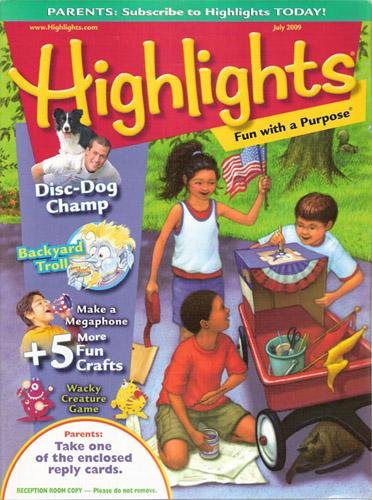 The advocacy group One Million Moms, which has previously made news with futile boycotts of Archie and the Lucifer TV series, has a new target for its ire: Highlights magazine, the waiting room mainstay aimed at kids from 6-12. This time the group is up in arms over Highlights’ recent announcement that it will include depictions of same-sex parents alongside the other diverse families already in its pages.

Highlights’ decision was spurred by a Facebook post from Kristina Wertz, a lesbian mom who noted that her partner had previously sent an email asking for families like theirs to be represented in Hello, the Highlights group’s magazine for 0-2 year olds. After they received no response to the private email, Wertz posted publicly that while they appreciate the diversity already shown in the magazines–”families of all races, interracial families, and grandparents”–they would like for their daughter to occasionally see same-sex parents included as well.

In responding to Wertz’s post, Highlights initially took the position that it would not change its editorial policy regarding same-sex parents because other “parents know best when their family is ready to open conversation around the topic.” After they received a wave of backlash on social media, however, the magazine issued two further statements on October 17 and November 8. In the most recent statement it was confirmed that same-sex parents will indeed be depicted in future issues of the magazine alongside all the other types of families such as those “headed up by a grandparent or single parent, or…adoptive families, blended families…,multi-generational families, and multi-racial families.”

On December 7, One Million Moms (which does not release its actual membership numbers but has fewer than 90,000 Facebook followers) swung into action with a post on its website claiming that Highlights “has caved to the left.” The group, a subsidiary of the American Family Association, encouraged its members to send the magazine a prepared email “questioning why your company would ignore millions of American families’ concerns by supporting the homosexual agenda instead of remaining neutral in the cultural war.” The email wraps up with a promise that “Highlights will not have my family’s business unless this decision is reversed.”

Even if Highlights does lose a few subscribers, it has likely already gained even more due to the attention brought by the Million Moms’ boycott. An article at Huffington Post gathered some Facebook comments from parents and grandparents who reacted positively to the more inclusive editorial policy and vowed to continue or start subscriptions. As Highlights pointed out in its own statement, the point of including diverse families in literature for young children is not to comment in any way on the relationship between adults, but “to help children become their best selves and understand that all families, including theirs, are important.” Kudos to the magazine’s editors for reconsidering their initial response and realizing that all children deserve to see their families represented in the world around them!