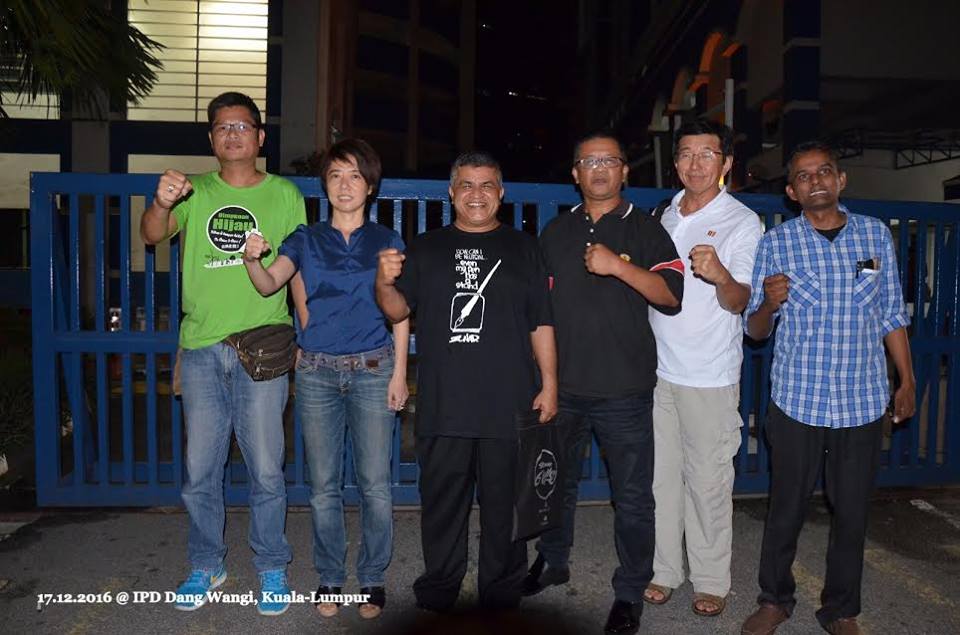 Zunar (third from left) and friends celebrate after being released from police questioning.

For the second time in less than a month, Malaysian police arrested political cartoonist Zunar. Last month it was at an exhibition of his cartoons in Penang; this time it was a “Tea with Zunar” fundraiser, book signing, and live sketch session in Kuala Lumpur. Zunar has now been released on bail after eight hours of questioning, but police seized about $6,700 worth of his books, and he may face yet another sedition charge, for a total of 11 counts against him.

Also arrested at the tea were two of Zunar’s assistants and two fans, including opposition party Member of Parliament Jimmy Wong. The fans apparently were detained for filming the 20 plainclothes police officers who descended on the event, while Zunar and his employees were questioned for “activities detrimental to parliamentary democracy.” Zunar posted a group photo with his co-arrestees and his lawyer Nicole Tan on Facebook after they were released from questioning around midnight on Saturday.

Prominently featured on the promotional flyer for the tea was Zunar’s rendition of Prime Minister Najib Razak as Donald Duck, which he recently conceived after Malaysia’s Inspector General of Police Khalid Abu Bakr said the political cartoonist should simply “draw McDonald’s or Donald Duck” instead of insulting leaders if he wants to be able to exhibit his work publicly.

Zunar’s first nine sedition charges stem from statements that he made on Twitter last February following the sentencing of opposition leader Anwar Ibrahim on a trumped-up sodomy charge. The cartoonist hinted that the judiciary in that trial had been subject to political pressure or bribery, observing that “the lackeys in black robes are proud of their sentences. The reward from political masters must be plenty.” He then exchanged Twitter barbs — and a cartoon — with Inspector-General of Police Khalid Abu Bakar as officers were en route to arrest him.

The criminal trial for those charges has been delayed several times, partly due to Zunar and his lawyers’ challenge of the Sedition Act, implemented during the British colonial era and before Malaysia had its own constitution, on the grounds that it “contradicted the constitution’s guarantee of free speech.” The High Court disagreed and said it had already addressed the question in rejecting a previous challenge by law professor Azmi Sharom, also charged with sedition. In February, however, Attorney General Mohamed Apandi Ali withdrew the sedition charge against Azmi, which had been pending since 2014.

The 10th sedition charge was added last month after supporters of Najib’s government stormed an exhibit of Zunar’s cartoons held in conjunction with the George Town Literary Festival in the state of Penang, an opposition stronghold north of Kuala Lumpur. The following day representatives of the ruling party UMNO lodged a formal complaint against Zunar, who was then arrested for sedition as well as a charge of “intentionally humiliating a person” — the Prime Minister.

← 2016 Wasn’t All Bad: It Had Comics!
Ahmed Naji to be Freed From Prison Pending Appeal →