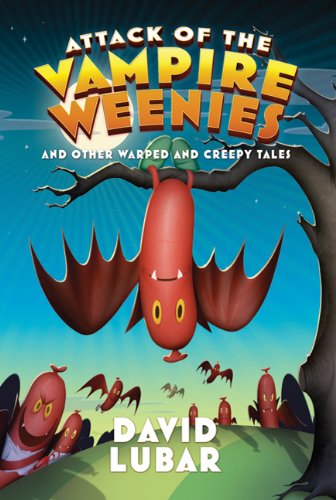 A Kansas middle school teacher’s overactive imagination nearly led to a local ban on a whole series of children’s short story books featuring anthropomorphic hot dogs on the covers, as reported by a Pennsylvania newspaper columnist yesterday. According to David Lubar, author of the Weenies series for middle-grade readers, the teacher wanted the books removed from her school’s library because she found the covers and some of the story titles to be “sexually suggestive.” Instead, the series was rescued by the librarian with help from Lubar and ALA’s Office for Intellectual Freedom.

Lubar’s Weenies books are highly recommended for middle-grade reluctant readers and fit somewhere on a spectrum between Alvin Schwartz (Scary Stories to Tell in the Dark) and Daniel Pinkwater (Lizard Music): horror and sci-fi that is genuinely creepy, but also infused with off-the-wall humor. The rare negative user reviews on Amazon’s sales pages for the books generally judge them to be too scary for certain readers, but make no mention of sexual innuendo.

Nevertheless, Lubar recently received an email from the librarian at an unidentified Kansas middle school, who was gathering resources in defense of his books after a teacher challenged them on the basis that “every sixth-grade boy would think these titles were sexual.” After the challenge was positively resolved, Lubar sent the story on to columnist Bill White of The Morning Call, his local newspaper in eastern Pennsylvania. White details a few of the out-of-context short story titles that raised objections from the teacher:

‘Dead Meat,’ a story in which a boy is attacked by butcher’s-case meat that comes alive; ‘Big Bang,’ in which a girl tries to end the universe; and ‘The Ride of a Lifetime,’ about a roller coaster. None of the titles had anything to do with sex.

The librarian, herself a former classroom teacher of 16 years, flatly told Lubar that neither she nor her library aide saw what their colleague saw, but “[the teacher] is very vocal and persistent and I think the administration would side with her over me unless I have LOTS of info backing my reasons to keep your books on the shelves.” Luckily, the author was able to provide her with a link to his ready-made thematic index of topics covered in the Weenies books, from Abandonment to Xenophobia. Another index also catalogs all of the literary devices used throughout the series.

Lubar and the anonymous librarian also received further backup from ALA’s Office for Intellectual Freedom. The author has encountered unique objections to his work before, as when he was disinvited from a scheduled school visit because “a parent complained to the principal that the stories…didn’t all have happy endings.” In the Kansas case, though, the librarian’s defense of the books ultimately met with success; in her final email to Lubar, she triumphantly informed him that “they are going back on the shelves today!”

In passing the story on to the Morning Call, Lubar hoped to highlight “how awesome librarians are.” He’ll get no argument from us there, but another moral of this tale is that librarians and educators who are called upon to defend challenged books should not hesitate to reach out for help–not only from organizations like OIF, CBLDF, and NCAC, but also from creators themselves, who just might have a list of their awards and educational resources ready to go!