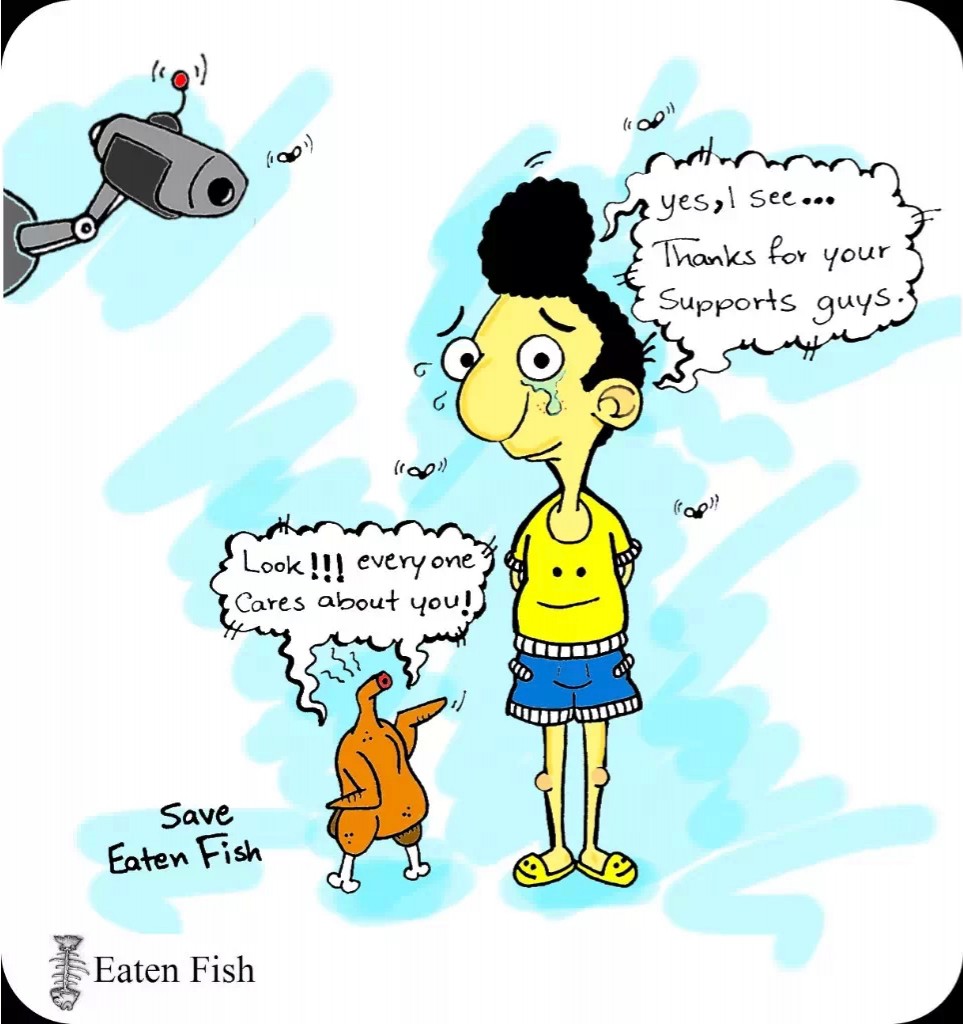 The Iranian cartoonist known as Eaten Fish, who is among the thousands of refugees sent to offshore detention facilities by the Australian government, is now in dire condition due to mental health issues compounded by an eight-day hunger strike. His request for asylum was denied late last year because he was unable to effectively advocate for himself, and he could be sent back to Iran.

Eaten Fish, whose given name is Ali, was already dealing with a OCD, PTSD, and panic attacks when he reached Australian territory in 2013. Like all asylum seekers arriving by boat he was placed in an offshore detention center, allegedly to await processing of his asylum application. Along with hundreds of other detainees on Manus Island and Nauru, however, he has instead been held for years in hellish conditions as described by The Guardian:

Needless to say, that situation in combination with the substandard health care provided in the camps has done nothing to improve Eaten Fish’s mental state. Factors including repeated sexual assaults from guards and other prisoners have triggered his OCD such that he obsessively washes his clothes and scrubs his body raw. His panic attacks are often accompanied by extreme pain and a paralytic state.

In the absence of adequate treatment, Eaten Fish’s continued cartooning may be the only outlet that keeps him barely hanging on, but he says he has also faced reprisals for simply documenting the conditions and his mental state. Last year, Cartoonists Rights Network International recognized him with its annual Courage in Editorial Cartooning Award.

Eaten Fish has struck up a correspondence with Australian cartoonist Andrew Marlton, AKA First Dog on the Moon, who brought his story to the public with a strip in The Guardian in July. Marlton has set up a website at eatenfish.com to draw attention to his plight and share cartoons of support from colleagues in Australia. Another advocate, writer Janet Galbraith, set up an online petition urging the Australian government to bring Eaten Fish into the country and provide him with the mental health care he desperately needs.

In late December, it was also The Guardian that broke the sad news that Eaten Fish’s application for asylum had been denied. According to Galbraith, the cartoonist “has not been well enough to disclose to immigration authorities the information expected of him.” Detainees do not receive legal representation and are not allowed to have advocates present to speak on their behalf. Iran currently does not accept forcibly repatriated refugees, so for now he remains in limbo.

According to a media release posted on EatenFish.com yesterday, the cartoonist began a hunger strike just over a week ago to protest immigration authorities’ threat to move him out of a mental health unit where he has been held for eight months and back into the general population, where he will again be subject to abuse. He now weighs about 105 pounds and told Galbraith that he feels “shaky, weak, has a lot of body pain, no longer feels hunger, is losing his memory and his heart is beating fast.” He also seems untroubled at the prospect of starving to death, telling authorities that “I will die and this will all finish.”

Given his rapidly deteriorating condition, Eaten Fish’s Australian advocates including Galbraith, Marlton, and Dr. Susan Ditchfield, are once again begging their government to bring him to the mainland for effective treatment. Incidentally, if his application for asylum had not been unjustly denied, he also could have been among the 1,250 refugees at issue in a tense phone call between President Donald Trump and Australian Prime Minister Malcolm Turnbull last week.