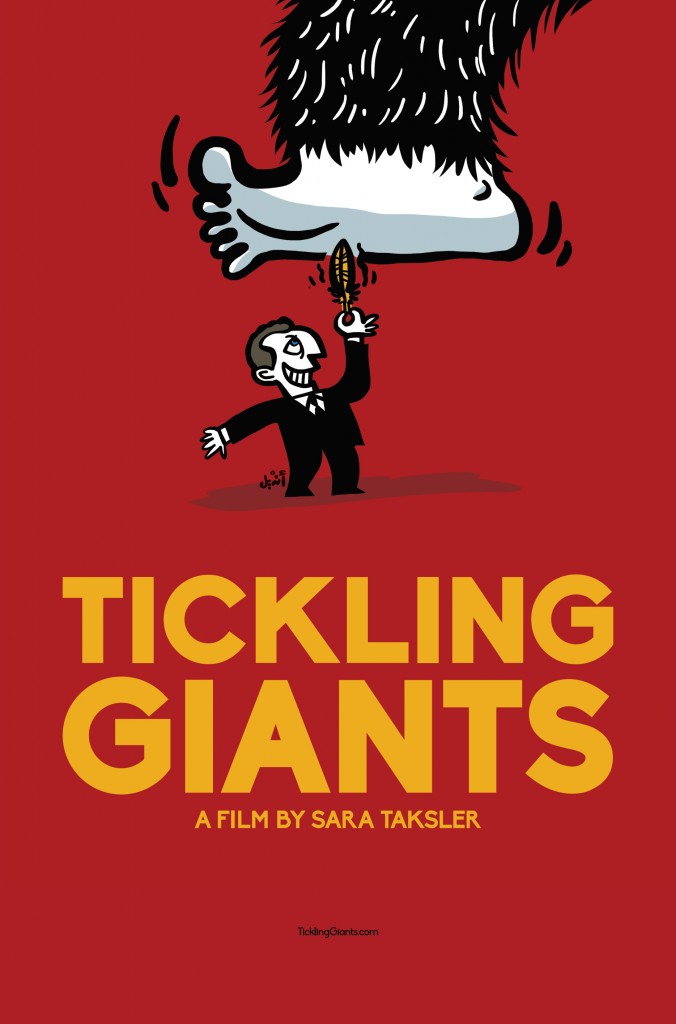 The new documentary Tickling Giants puts the spotlight on the important role of satire and humor in political dissent–in this case, Egyptian heart surgeon-turned-comedian Bassem Youssef, who launched a Daily Show-inspired TV program in the midst of the Arab Spring in 2011. Featured alongside Youssef is Andeel, one of Egypt’s best-known indie cartoonists, who contributed irreverent drawings and animations to both the TV show and documentary.

Youssef’s show Al-Bernameg (The Show) was relatively short-lived, lasting only three years on two different channels before the host was forced into exile. He now lives in the U.S. and recently produced the digital series Democracy Handbook for Fusion, as well as the upcoming book Revolution for Dummies: Laughing Through the Arab Spring. Partway through his run on Egyptian TV, Youssef joined forces with Andeel, who was already well-known in his own right. In that same watershed year of 2011 Andeel was also one of the founders of Toktok, an indie comics magazine that inspired others to follow in its wake.

In the clip from Tickling Giants below, Andeel explains his view on the success of Al-Bernameg and his own cartooning work before and after that, saying that “comedy and satire work really, really well in the moments we are not supposed to laugh.” Andeel and Tickling Giants director Sara Taksler will present a Q&A session in conjunction with the documentary at Amnesty International’s Movies That Matter festival in The Hague, Netherlands on March 28, but North Americans who can’t make the trip can still check for an upcoming screening of the film by scrolling down here. Libraries, educational institutions, and community organizations can also sign up to host their own screenings.

Although Al-Bernameg was forced off the air, Andeel continues to live in Egypt and contribute work to various publications including Mada Masr (source of the cartoon that accompanies this post, showing Egypt’s President Abdel Fattah el-Sisi alongside President Trump) and Egypt Independent. His various commissioned and independent projects can be found here.