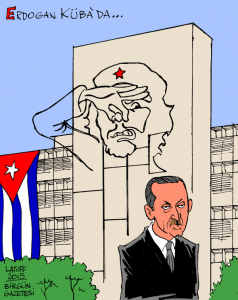 Turkish actor and columnist Orhan Aydin has received a suspended sentence of 11 months and 20 days prison for insulting Turkish President Recep Tayyip Erdoğan by sharing a cartoon on social media.

Aydin shared a cartoon by Brazilian cartoonist Carlos Latuff that mocked Erdoğan’s visit to Cuba. The Istanbul court that passed the sentence also cited Aydin’s social media posts hinting at a similarity between Erdoğan and Adolf Hitler as a factor in the sentence.

In the wake of the failed July 2016 coup, the Erdoğan regime cracked down on journalists throughout the country. Aydin was among the Cumhuriyet journalists who were taken into custody shortly after the coup attempt, but he was not kept in prison pending charges due to his age. In an interview about his detention, Aydin addressed the government’s overreach:

We are faced with a government that considers the attack against “Cumhuriyet,” the declaration of the state of emergency and the coup attempt as the “will of God,” and uses this to silence all dissident voices, instead of punishing the coup plotters. However, this attack against “Cumhuriyet” is just one more step too far. This is the reason why people that feel suffocated with regard to democracy and freedom have been gathering in front of the newspaper building.

Cumhuriyet, one of Turkey’s oldest and most respected newspapers, was subject to another raid in early November that led to the arrest of more than a dozen employees, including cartoonist Musa Kart. They are accused of supporting Kurdish militants and the Gulenist movement. Musa Kart and his colleagues have been held since the arrest, and charges were only brought against them early this month. The charges specifically against Musa Kart are “helping an armed terrorist organization while not being a member” and “abusing trust.” He faces up to 29 years in prison.

In August, Turkish-born cartoonist Dogan Güzel was arrested in Istanbul along with more than 20 colleagues from the Kurdish newspaper Özgür Gündem, which was shut down by government order. Güzel, the recipient of Cartoonists Rights Network International’s very first Courage in Editorial Cartooning Award in 1999 and now a naturalized Spanish citizen, happened to be visiting his friends and co-workers in Turkey when police raided the newspaper.

Özgür Paksoy, a journalist who was arrested with Güzel, was also detained at a checkpoint after the coup attempt for questioning over another Latuff cartoon. The cartoon, which Paksov shared on social media, suggested that Erdoğan was linked to last year’s fatal shooting of Tahir Elçi, a prominent pro-Kurdish lawyer and rights activist.

Turkey’s judicial system has not yet announced any trial dates for Musa Kart and his colleagues, and we have been unable to locate English-language updates on Güzel’s case. We will continue to follow the situation.

← CBLDF Joins Defense of The Kite Runner in Arizona
CBLDF Warms Up for C2E2! →