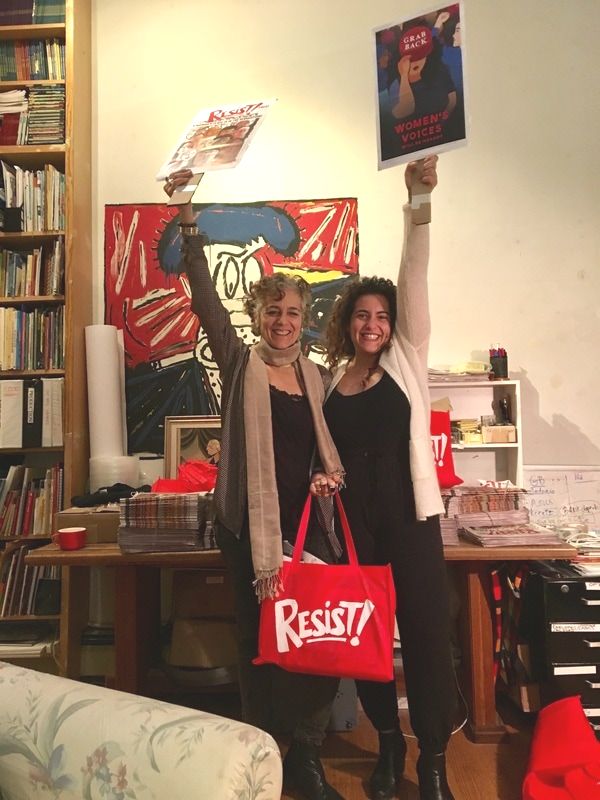 Françoise Mouly and Nadja Spiegelman have opened submissions for the second edition of their political comics newspaper RESIST! The mother-daughter team’s anti-Trump forum is published by Desert Island, who produced 60,000 copies of the first issue circulated at Women’s Marches across the country. They discussed their journey, and introduced some of the fellow travelers they met along the path, during a panel at last weekend’s MoCCA Arts Festival.

“We were so unprepared for any reality that Trump would be president,” Mouly, the Art Editor at The New Yorker, recalls. “It felt like we hit a brick wall full force.” That brick wall was reflected literally on the cover of the post-election edition of The New Yorker. Stipulating no photography, Mouly showed the original cover she’d sent to the printer, confident of Clinton being elected, of a blonde woman in a red suit, back turned to us, looking out of the oval office towards the Washington Monument at night.

Mouly continued, “I was in a state of absolute shock and had no idea how to move forward. But then I got a call from Gabe Fowler [of Desert Island], who had in mind doing an all-women issue of his newspaper Smoke Signals. I had been talking to my girlfriends about wanting to make something for the women’s march. We needed to hold onto this moment. We’ve been robbed of our first woman president, and it felt correct to try to hold onto that feeling of a woman’s voice being heard and expressed. The idea of doing a print publication sounded really great. I called on Nadja who was visiting from Paris for Thanksgiving. We immediately had the name for it: RESIST!”

Nadja Spiegelman, a writer and editor, noted that the call for submissions published on Thanksgiving and went viral. “By the three-week deadline, we got a thousand submissions,” she said.

Mouly said, “One of the things that was really exciting as submissions were coming in was the range and diversity of topics and skill levels. We were getting a lot of images from established professionals as well as people who’d never drawn before or used cartoons or comics.”

“It was exciting getting to ask people who they are,” Spiegelman added.  “By evaluating men and women separately we saw a collective women’s voice.” She said the first round of submissions tended to come from men, and were largely images of Trump. Women sent images emphasizing diversity and unity among women, as well as responses to Trump’s attitudes towards women’s bodies.

Spiegelman noted that publishing submissions in real time on the RESIST! Tumblr had a liberating influence. She observed, “When women speak alone they feel pressure to talk for all women but once they realized they were part of a group, they spoke for themselves and their own identity.”

Visibly enthusiastic, Spiegelman and Mouly spotlighted the work of several contributors, including a KQED produced video about Quinn Nelson, a 14-year-old artist based in Oakland. “This made us cry,” Mouly said. “She’s exceptional. I was so impressed with how articulate everybody was about the reason why they were making comics. It had the sense of agency, which is exactly the reason we wanted to do this.” 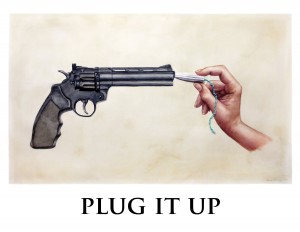 They then invited New York based contributor Laura Murray to tell the story behind her contribution “Plug It Up.” Murray shared the editors’ desire to turn their disappointment into productive action. She drew upon a harrowing personal experience of being dragged into her apartment building lobby at gunpoint by a pair of thieves. “Luckily, I wasn’t physically harmed and was so incapacitated they left me in the lobby. The first thing I did was call the cops, and the second thing I did was pull out a sketchbook and draw their faces. The next day the police called me to a line-up after catching these same two guys mugging another woman. So, this whole story wound up being a good thing for me because it showed me art has real world application and can make the world a better place.” 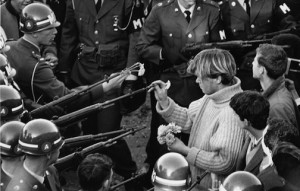 Flower Power, 1967, photographed by Bernie Boston on October 21, 1967, while he was sitting on the wall of the Mall Entrance of the Pentagon.

For her RESIST! contribution Murray says she drew upon Bernie Boston’s iconic Vietnam-era protest image “Flower Power” as well as “my own feminist pride, and came up with an image that takes something seen as feminine and weak, and turns it around to be the thing that stops violence.”

Mouly noted that after the editorial was done, the next hurdle was distribution. Online preorders were so successful, they were able to expand their print run, and needed help getting the newspaper to women’s marches around the country. For this, Mouly and Spiegelman found allies in comic book stores and volunteers, including CBLDF’s own Editorial Director. Mouly remarked, “At some point we talked to Betsy Gomez, who was doing an article, and asked, ‘How will you distribute?’ And we said, ‘Will you take a pallet with 5,000 copies?’ And she did!”

Spiegelman and Mouly also found international interest. They report that a London publisher is going to print a digest-sized edition for Trump’s upcoming visit. A German sister-publication is preparing 10,000 copies, and a digest size version is also being planned in France.

After the success of the first edition, Mouly says, “It’s not time to rest on our laurels yet. There’s a lot to do.”

Submissions for the second edition of RESIST! close on Friday, April 21.