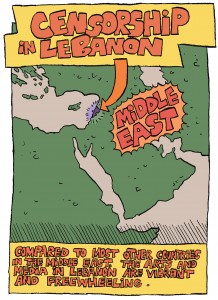 A new comic on The Nib provides an illustrated look into the censorship problem in Lebanon.

The comic by Ghadi Ghosn and Virginie Le Borgne examines how censorship impacts the country’s vibrant arts community. The comic points out that certain topics — religion, sexuality, civil war, and Israel — are more likely to attract state censors, and that antiquated laws, a lack of guidelines, and religious authorities complicate matters.

The comic offers several examples of censorship, from sublimely ridiculous — filmmaker Francis Ford Coppola had to land in Syria while in transit to a Lebanese film festival because a part of the plane he was flying in had been manufactured in Israel — to terrifying. Among the latter is the successful prosecution of the editors of the Samandal comics magazine for “inciting sectarian strife” and “denigrating religion.” The editors resorted to crowdfunding to pay their fine and to stay in business.

Naturally, the risk of living under the threat of state censorship means that many artists self-censor in order to avoid drawing the attention of censors. As Samndal editor Lena Merhej told CBLDF in an interview for She Changed Comics, the risks of publishing in Lebanon can be intimidating:

The only risk is the censorship. Dragging the artists to court and having them pay. I think that would be terrible. We would all be discouraged. Now on the other hand, our lawyer says it’s also a matter of defending cases so that we can work on a law that is clear for the future generations. I don’t know how many of us are willing to be martyrs.

You can view Ghosn and Le Borgne’s cartoon about Lebanese censorship here.