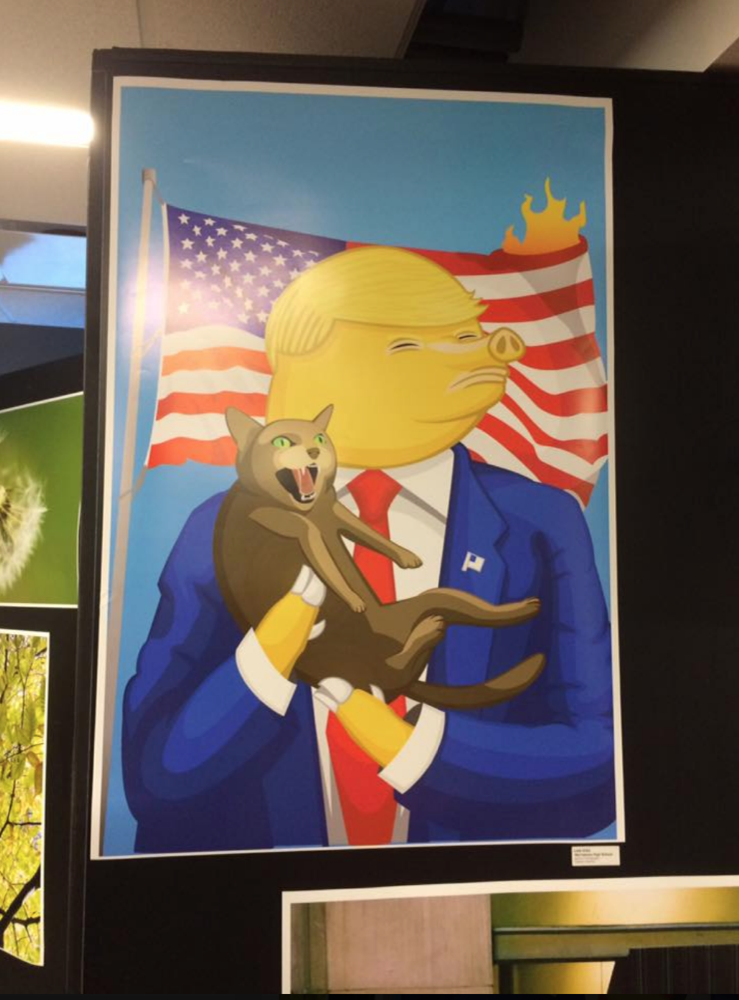 A high school junior in Morristown, New Jersey, is finding himself in the limelight after his satirical portrait of President Donald Trump was removed from his school’s annual art show. Morristown High School student Liam Shea said that Principal Mark Manning first complimented his work and then said it would be taken down because “other people weren’t too happy with this.”

Shea’s computer-generated graphic depicts Trump as a yellowish pig standing in front of a burning U.S. flag and holding a hissing (pussy) cat. Another piece by an unidentified student, showing “Trump on a missile, taking a selfie,” was also removed from the show, according to local news site MorristownGreen.com.

Liam’s mother Kelly Shea said she was both disappointed and angry that her son’s art was banned based on his viewpoint:

To me, that’s what art is for, especially for political things. That’s how people express to the world how they feel about what’s going on…I don’t think the image is offensive. I think it’s clever.

The artist, an aspiring video game designer, seems quite pleased that his work had such an impact. “I think it’s great,” he told Morristown Green’s Kevin Coughlin. “If it wasn’t taken down, I wouldn’t be talking to you!”

The piece is still slated to appear in the MHS literary magazine Tricorn, and Liam reports that “a dozen people told me to make a t-shirt. I could be paying for my college tuition.”

Although critical thinking and debate should be an essential part of all education, and art education in particular, students around the country are too frequently pressured to curtail free expression in their school projects. Here are some other high school art controversies from the past few years: